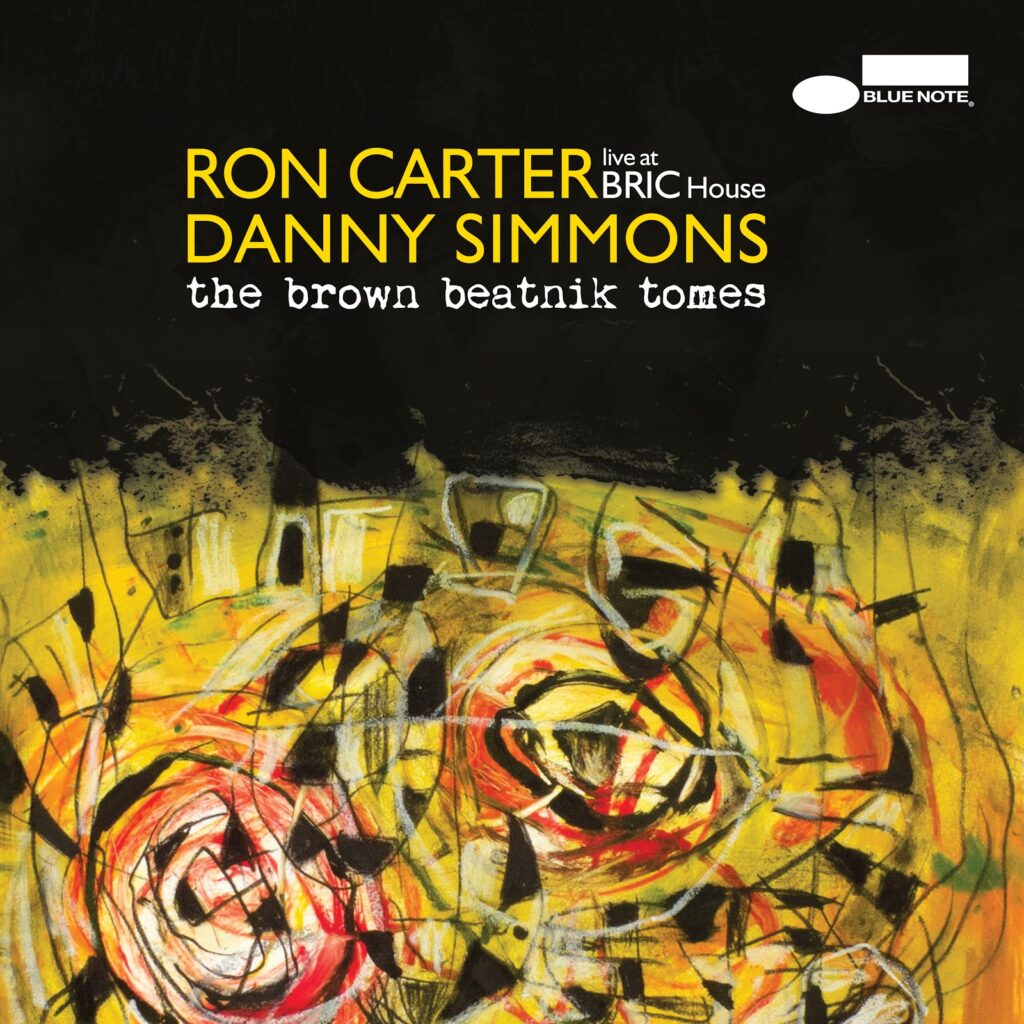 Ron Carter and Danny Simmons announce The Brown Beatnik Tomes – Live at BRIC House, a new album to be released on June 7th via Blue Note. On the bass: Ron Carter (who will turn 82 next week) not only played in Miles Davis’ Second Great Quintet but, with well over 2,200 sessions to his name, is the Guinness-certified most-recorded jazz bassist in history. And on the words: Danny Simmons, a Tony-winning cofounder of Def Poetry Jam, not to mention a novelist, poet, gallerist, and neo-African abstract expressionist whose paintings have appeared in the Smithsonian and the United Nations HQ.

On one autumn night at Brooklyn’s BRIC House, Carter and Simmons turned raw-plucked bass lines and hotly read poetry into something that rang with meaning and felt like magic. What they created that night was, and still is, called The Brown Beatnik Tomes. It had began as a book, became an event, and is now an album. But what it really is, is an irresistible concept.

“I was trying to imagine myself as a Beat Generation poet in the ’50s,” says Simmons, “and how my concerns would be a bit different from Lawrence Ferlinghetti’s or Allen Ginsberg’s. In a way, the beatniks romanticized black people. They were hip, but they didn’t really see the plight. That scene largely was about the Negro experience but didn’t have the Negro in it.” Thus, the pieces that appear here match the visual language, jazz patter, and energetic immediacy of the best of the Beats — Ginsberg’s Howl is one of Simmons’ all-time favorites — but the point of view has shifted 180 degrees, from voyeur to source. And who better to accompany this remix of history than a man who lived through it — Carter was in his 20s, working in New York, during the era.

“I was not participating in the Beat movement,” says the man who’s played on radical albums by Gil Scott-Heron and A Tribe Called Quest alike. “Those were white guys saying what they were saying. I was involved in the black community, playing with people like [folk singer] Leon Bibb. A similar thing was happening there, and my music was trying to support that.” Here, Carter finds himself continuing that tradition, walking his bass ever so off-kilter beneath lines like (from the title track): “I dreamed I saw Bob Dylan pay homage to an effigy of LeRoi Jones on burning Newark streets rattling a necklace of harmonicas at passersby on slave ships roaring down the streets of history, jig dancing for loose change and selling lines of poems for a pittance’s sake.”

Simmons and Carter aren’t alone on The Brown Beatnik Tomes – Live at BRIC House. Carter’s trio, rounded out by pianist Donald Vega and guitarist Russell Malone, assembles for a pair of instrumentals including the breezy, palate-cleansing “Here’s to Oscar” (a tribute to pioneering bebop bassist Oscar Pettiford). And Simmons was, in a way, accompanied by his paintings — which are paired with the poems in the Brown Beatnik Tomes book — as they were projected behind him. Also, playwright, actor, and Def Poetry alum Liza Jessie Peterson (The 13th, The Peculiar Patriot), brings her spoken word to the mesmeric “Where Do I Begin,” an epic rebuke of a system that openly embraces and benefits from black culture while simultaneously treating that culture’s creators as disposable or, even worse, threats that ought to be eliminated.

Throughout, the music feels both perfectly composed for every poem and also completely in the moment. That’s the Ron Carter touch. “I hear the rhythm and cadence in my head when I write,” says Simmons. “To stand up there and have to reproduce that with somebody as accomplished as Ron was a little… I’m going to say ‘terrifying.’ Basically, I let him do his thing and I followed.” But Simmons takes listeners on a journey too. Right out the gate, we get “For a Pistol,” a stirring resurrection of, and dedication to, the revolutionary spirit of beatnik contemporary Amiri Baraka (f.k.a. LeRoi Jones).

Even if the art came from a place of spontaneity, the themes are rooted in historical soil and intertwined with our modern landscape. Simmons and Carter built in moments for listeners to digest all of this. One night in Brooklyn, two giants took the stage. There may never be another evening exactly like it, but what Simmons and Carter created echoes, like a howl, for as long as we’ve got ears.

The track listing for The Brown Beatnik Tomes – Live at BRIC House is as follows: