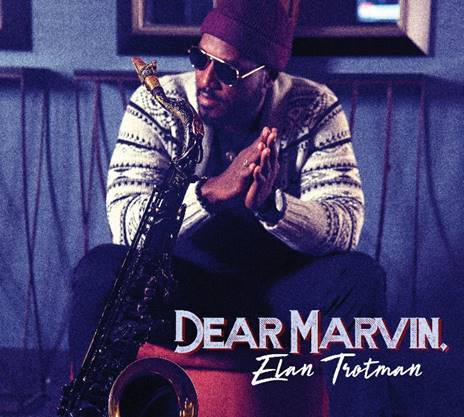 He drops a tribute album, “Dear Marvin,” on April 2, the iconic crooner’s 80th birthday. The first single, “Got To Give It Up,” is the No. 1 most-added single on the Billboard chart this week.

BOSTON: Sax salutes sexy soul on Elan Trotman’s “Dear Marvin,” a collection of ten of Marvin Gaye’s best-loved songs that drops on April 2, the late legendary R&B singer’s 80th birthday. Preceding the set’s arrival is the single “Got To Give It Up,” a vibrant reboot of one of Gaye’s funky dance tracks that is the No. 1 most-added single on the Billboard chart this week as an instrumental from the Woodward Avenue Records album produced by Charles Haynes (Marcus Miller, Erykah Badu, Queen Latifah) and Trotman.

“It’s amazing how this project came about. ‘Got To Give It Up’ has been a huge part of my live show for the past two years and has always been a crowd favorite. That is just one of the many factors that inspired me to record the song and to dig deeper into Marvin’s catalogue and life story. I had no idea that his 80th birthday would be coming up around our time of completing the album, but once I found out, I knew we had to release it on April 2 to mark the occasion,” said Trotman, an award-winning saxophonist who has topped the Billboard singles chart more than ten times.

“It’s been an honor to be able to share my interpretations of some of Marvin’s classics. As with all cover projects, I made an extra effort to learn lyrics and storylines for each composition in order to truly understand his interpretations and performances on each song,” said the Boston-based Trotman, who is planning to be in Los Angeles on April 2 for an 11am ceremony held by the United States Postal Service at The Greek Theatre to celebrate the release of the Marvin Gaye commemorative Forever stamp.

“We, Marvin’s family, heard about Elan doing a musical tribute to Marvin. We are very pleased with his album ‘Dear Marvin,’ and are so happy that it will be released on his birthday, April 2. The musicians are all incredible! Thank you, Elan Trotman. Job well done,” said Janis Gaye, Gaye’s second wife.

“Dear Marvin,” is Trotman’s eighth album and second on the Woodward Avenue Records imprint. The label issued the saxophone-flute player’s 2013 disc, “Tropicality,” an autobiographical album that colors contemporary jazz with native sounds from Trotman’s homeland, Barbados. Trotman curates, produces and hosts the Barbados Jazz Excursion and Golf Weekend annually over Columbus Day Weekend with the sixth edition taking place this October 10-14. Bringing that winning formula closer to home, he will launch the first annual Martha’s Vineyard Jazz Excursion and Golf Weekend in Oak Bluffs, MA on June 28-30. To support the album release, Trotman will perform at festivals, theaters and nightclubs through October beginning with the prestigious Boscov’s Berks Jazz Festival in Reading, PA on April 5.