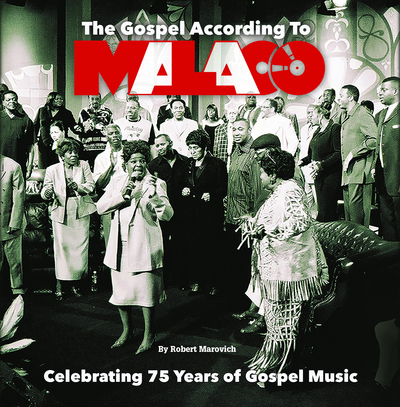 Malaco Music Group To Release
The Gospel According To Malaco:
Celebrating 75 Years of Gospel Music

The Malaco Music Group has amassed the the largest black gospel catalog in the world. Their new collection The Gospel According to Malaco: Celebrating 75 Years of Gospel Music (out February 28, 2019) is an unparalleled book and eight CD set which tells the story of gospel music over a seventy-five year period from the post-war years to the present. This is the first time this story has been told in size and scope, providing the history behind one of the most important genres in music.

Check out a Spotify sampler of The Gospel According to Malaco:
Celebrating 75 Years of Gospel Music HERE.

The compilation offers a number of hit recordings along with numerous musical treasures just waiting to be discovered. The collection includes Mahalia Jackson, Sister Rosetta Tharpe and Rev. James Cleveland, along with other notable artists such as The Gospel Keynotes, Solomon Burke, The Caravans and The Mississippi Mass Choir. This set is also one of the first, if not the first, to explore in depth the mass choir phenomenon that not only dominated gospel radio from the mid 1970s to the early 1990s but also produced many of today’s top-selling songwriters, soloists and musicians.

Renowned author and researcher Robert Marovich tells the stories of the 100 recordings contained in the eight CD anthology. Marovich, the author of the authoritative A City Called Heaven: Chicago and the Birth of Gospel Music, hosts a weekly gospel show on Chicago WLUW 88.7 and runs the superb website, The Journal of Gospel Music. A meticulous researcher, his liner notes greatly complement the music included here. About the project, Marovich notes, “Never before have so many memorable gospel songs from so many significant gospel stars been collected in one package. These songs brightened spirits when they were released and continue to do so today whenever they are heard. This collection presents some of the best of African American gospel music and does it with the grace and dignity the songs deserve.”

ABOUT THE MALACO MUSIC GROUP:
The Malaco Music Group was founded by Tommy Couch and Mitchell Malouf in 1968 and consists of several iconic record labels such as Malaco, Apollo, Savoy and Atlanta International, in addition to its other imprint labels Chimneyville, Music Shoals Sound, Juana, Waldoxy and 4-Winds. Malaco, based in Jackson Mississippi, is one of the few truly independent record labels still in business. According to writer Rob Bowman, “Malaco was founded in emulation of the great R&B labels of the 1950s, 60s and 70s, such as Chess, Ace, Peacock, Atlantic, Stax and TK. Malaco has somehow outlasted them all.” Although they have been involved in all types of music, at the end of the day Malaco has been extremely successful with its Soul, Blues and Gospel music, and as such, prompted author Peter Guralnick to dub Malaco “The Last Soul Company.”