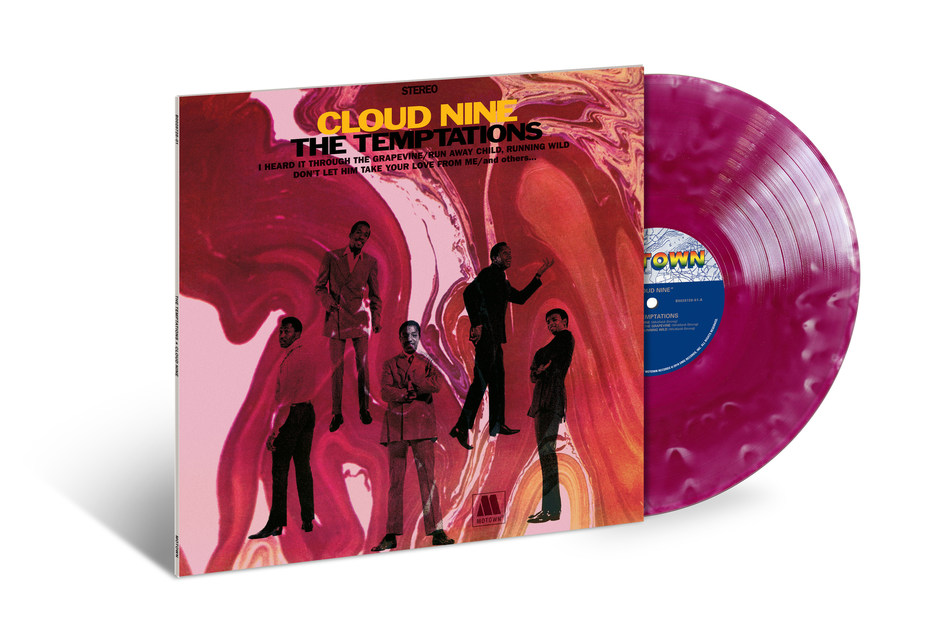 LOS ANGELES, Oct. 19, 2018 /PRNewswire/ — Released by Gordy/Motown in February 1969, Cloud Nine put The Temptations at the forefront of “psychedelic soul.” Featuring the debut of lead singer Dennis Edwards and produced by Norman Whitfield, the album is highlighted by the GRAMMY®-winning No. 2 Billboard R&B / No. 6 Billboard Hot 100 hit “Cloud Nine;” the full-length version of the No.1 R&B / No. 6 Billboard Hot 100 smash “Run Away Child, Running Wild;” and other Tempts classics. Today, Cloud Nine is reissued by Motown/UMe in a limited vinyl LP edition on psychedelic, spaced-out color swirl vinyl matching the album’s vivid original cover art.

The Temptations’ ninth studio album, Cloud Nine topped Billboard’s R&B Albums chart at No. 1 for 13 weeks and it peaked at No. 4 on the Billboard 200. The GRAMMY Award won for the album’s title track (Best Rhythm & Blues Performance by a Duo or Group, Vocal or Instrumental) was the group’s first, as well as the first for Motown Records.

The album’s “Run Away Child, Running Wild” is a sprawling, nine-minute and 21-second piece that moves from its first half with vocals (the part extracted for the album’s second single) into an instrumental jam session, featuring Motown’s Funk Brothers band with Earl Van Dyke on swirling organ, and Dennis Coffey and “Wah Wah” Watson on guitars.

Influenced by Sly & the Family Stone’s provocative fusion of rock ‘n’ roll, R&B, and funk, and set against the social and political turbulence of late 1960s America, Cloud Nine introduced a notable new direction for The Temptations’ style, while also helping to pave the way to 1970s funk/soul.

“You can’t expect to last if you don’t make some changes with the times,” Temptations leader and founding member Otis Williams said of the album. “What really grabbed me was Sly & the Family Stone’s first hits.”

“‘Cloud Nine’ and ‘Run Away Child, Running Wild’ not only work as pop protest but bear witness to how funky these smoothies have become.” – Robert Christgau

The Temptations’ first new album in eight years, All The Time, was released May 4, 2018 by UMe. Praised by the Associated Press for its “musical magic,” the album features the legendary group’s inspired renditions of songs by Sam Smith, Bruno Mars, John Mayer, Maxwell, Ed Sheeran, Michael Jackson, and The Weeknd, and three new, original Temptations songs.

Following this year’s acclaimed, sold-out engagements in Washington, Los Angeles, and Toronto, the electrifying Temptations musical, Ain’t Too Proud—The Life and Times of The Temptations, will open on Broadway at the Imperial Theatre on March 21, 2019, following previews that begin February 28. Presented by the most recent recipient of the MacArthur Foundation “Genius Grant,” playwright Dominique Morisseau, Olivier Award-winning choreographer Sergio Trujillo, and two-time Tony Award-winning director Des McAnuff, Ain’t Too Proud explores the group’s extraordinary journey from the streets of Detroit to Motown fame and the Rock and Roll Hall of Fame.

SIDE A
1. Cloud Nine
2. I Heard It Through The Grapevine
3. Run Away Child, Running Wild