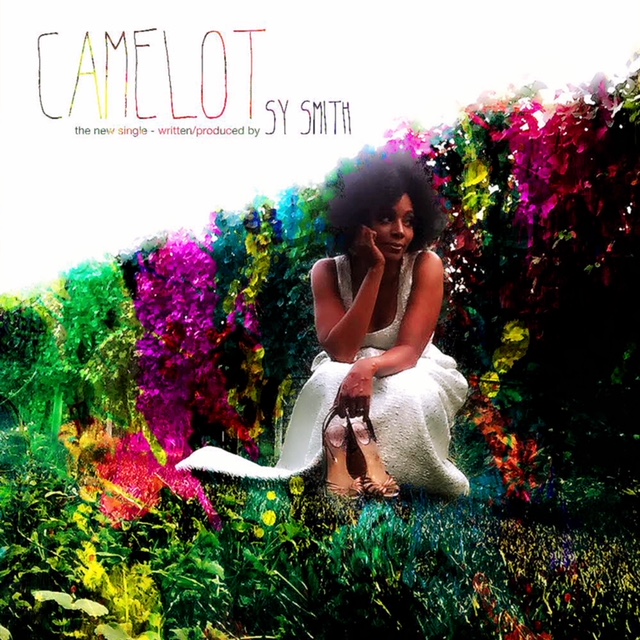 “QUEEN OF UNDERGROUND SOUL” SY SMITH
INVITES US ON A DREAMY, SENSUAL TRIP TO “CAMELOT,”
THE THIRD SINGLE FROM HER INDIE HIT ALBUM
‘SOMETIMES A ROSE WILL GROW IN CONCRETE’

Sy’s Performance in Austin, TX September 30 Kicks Off A
New Round of Dates in Support of the Album Over The
Next Few Months, Including Stops in NYC, Annapolis, Baltimore,
Washington, DC and on the Capital Jazz SuperCruise

On “Camelot,” the beautiful, sensual new single from Sy Smith’s critically acclaimed new album ‘Sometimes A Rose Will Grow in Concrete,’ the “Queen of Underground Soul” takes us on a heavenly, throwback-quiet-storm type of journey; inviting us to dream and fantasize along with her about the perfect love, “all in my mind.” The track, the third single from the collection following “Now and Later” and “Perspective,” will be serviced to Urban AC radio on September 24.

Singles released earlier this year, “Now and Later” and “Perspective” became a popular tracks on smooth jazz and Urban AC radio outlets, including rotation spots on Sirius XM’s Adult R&B hits station Heart & Soul and Music Choice’s R&B Soul channel. The official video Sy shot for “Now and Later” scored over 35,000 views on YouTube/Facebook. “Perspective” currently has over 64,000 streams on Spotify with the live video performance getting over 60,000 views on YouTube/Facebook.

The multi-talented singer/songwriter and performer has done two rounds of touring since the album’s release in February, starting with late winter-early spring performances in Houston, Dallas, Atlanta, Baltimore, Washington DC, Philadelphia, and New York. This summer, she did shows in Oakland, Boston, Montclair, NJ, Cincinnati, Indianapolis, Detroit, St. Louis and Chicago. “Camelot” has received rousing ovations everywhere, with audiences connecting deeply with the perfect romance and hopeful “love will come and find you” scenario. Invariably, they have risen to their feet as the song draws to its dramatic crescendo, with Sy, voice and emotions rising, singing the title over and over.

“Whether one associates the word with King Arthur, the Broadway musical or the Kennedy era in American history, we all know that ‘Camelot’ is not a real place but a realm of a fairy tale,” Sy says. “The same goes for the character in the song. She’s experiencing a relationship that only exists in her mind. Yet it’s very real to her and plays out beautifully as she envisions it. In real life, the man she is singing to and about has no idea…but as I sing, ‘it wants to take flight.’

“When I perform the song,” she adds, “I introduce it by telling the story so that when I start singing, people know that I’m describing a dream – and the floating feeling of the music truly reflects that. In modern terms, I compare Camelot to a fictitious place like Wakanda from ‘Black Panther,’ and people get a kick out of it. There’s definitely a line she’s walking between a full on fantasy and making it real, and I have fun exploring that. When I sing the ‘la la la’ part, it’s me sort of snapping her – and the audience – back to reality.”

Sy will be headlining more dates in support of “Camelot” and ‘Sometimes a Rose Will Grow In Concrete’ starting on September 30 in Austin, TX. Her current schedule includes November dates in NYC (11/2) and Annapolis, MD (11/20), a week on the Capital Jazz SuperCruise in January (17-24) and February shows in Baltimore (2/8) and at Blues Alley in Washington, DC (2/9-10).

Sy’s previous albums include The Syberspace Social, named one of the Top Albums of 2005 by The Boston Globe); 2007’s Psykosoul Plus, featuring stellar production from A Tribe Called Quest’s Ali Shaheed Muhammad and The Roots’ James Poyser; and 2008’s Conflict, which included the charting radio singles “Fly Away With Me” and “The Art of You.”

An internationally acclaimed vocalist, Sy has toured and/or recorded with many legendary artists and musical greats, including Whitney Houston, Meshell Ndegeocello, Macy Gray, Chaka Khan and Grammy-winning trumpeter Chris Botti. Her longtime association with bandleader Rickey Minor includes six seasons as a vocalist on “American Idol.” A part of trumpeter Chris Botti’s ensemble on and off since 2007, Sy appears on his current Great Performances special on PBS. She is also featured on three tracks of legendary bandleader Pete Escovedo’s new album ‘Back To The Bay,’ and is prominently featured in the video for “Let’s Stay Together,” which has over 2 millions views on YouTube/Facebook combined.