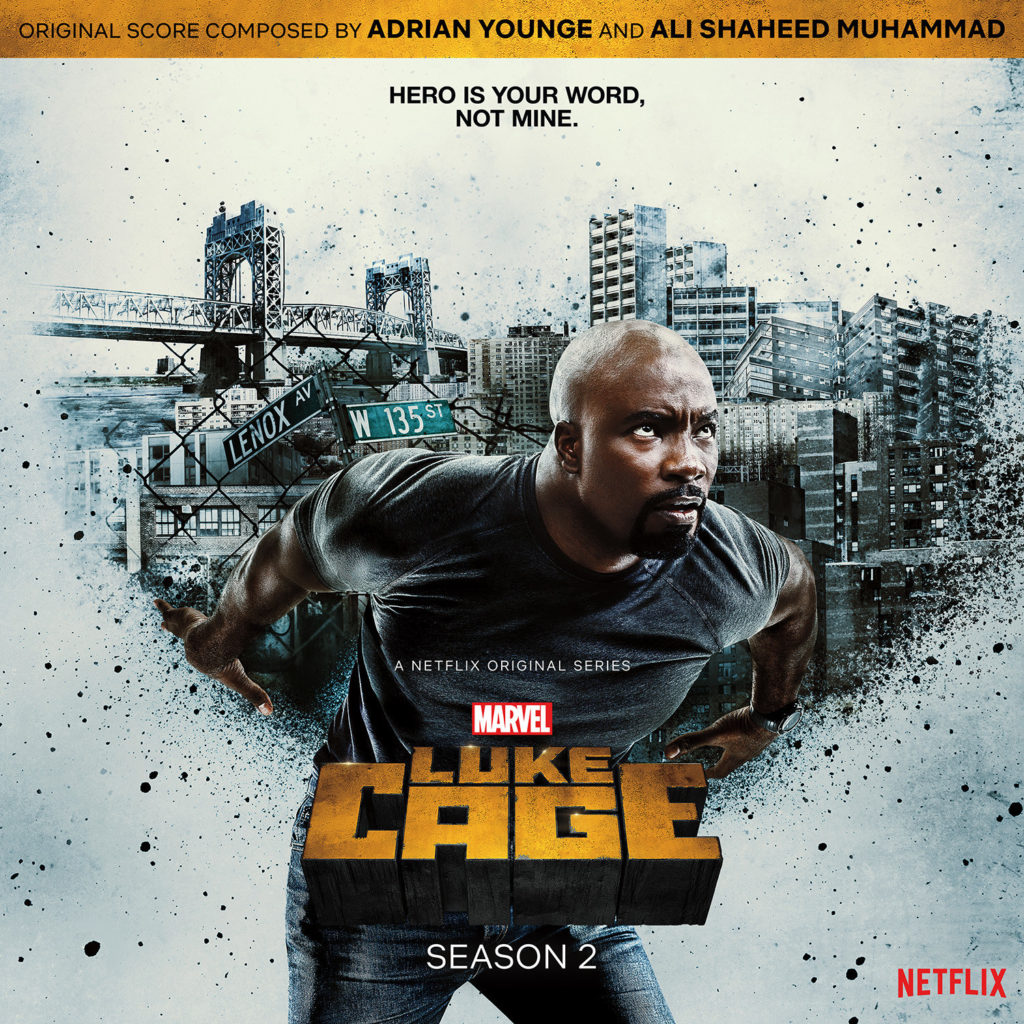 BURBANK, Calif., June 19, 2018 /PRNewswire/ — Marvel is set to release the digital soundtrack for the second season of the Netflix original series “Marvel’s Luke Cage” on June 22, 2018. The album coincides with the release of the second season of the hit series on the same day and features original score by returning composers Ali Shaheed Muhammad (A Tribe Called Quest) and Adrian Younge (Ghostface Killah, JAY-Z, Bilal, Souls of Mischief).The duo’s critically acclaimed score for Season 1 featured influences ranging from David Axelrod, Ennio Morricone, to A Tribe Called Quest and Wu-Tang Clan, which were brought to life in the series and soundtrack. The musical world created by the composers became a character, infused with hip-hop culture for the show’s Harlem setting.

For the second season, the composers desired to expand the sound and included a rhythm section and orchestra. For the character Bushmaster (Luke Cage’s nemesis), Muhammad and Younge created what they call “symphonic reggae” for his theme, blending the soul of reggae music with an orchestra. Their inspirations for Season 2 included the films of Alfred Hitchcock and “Mission Impossible,” plus the television series “Kojak,” “Baretta” and “The Incredible Hulk.”

In addition to the score, the album also includes licensed tracks plus the song “King’s Paradise” performed in an episode by Rakim, regarded as one of the most influential MCs of all time. The track was written by William Griffin, Younge and Muhammad.

Also featured in an episode is R&B singer Joi performing “Love You Forever Right Now,” a song she co-wrote with Marlon Cox and Gabrielle Dennis (Tilda Johnson) performing “Family First,” a song co-written by Younge, Muhammad and Dennis, with vocals produced by Cheo Hodari Coker. The soundtrack also includes two covers by teen blues guitarist Christone “Kingfish” Ingram, “I Put a Spell on You,” and “The Thrill is Gone.” All songs were composed and produced by Younge and Muhammad.

Show runner Cheo Hodari Coker said, “If Season 1 was about the hip-hop and the Wu-Tangification of the Marvel Universe, Season 2 is about the ROOTS of hip-hop: reggae and the blues. How both smashed up against each other to create the sonic backdrop of what we now know as hip-hop. The rhythmic stew of funk, rhythm and blues, soul, melded with the Jamaican ‘DJ’ tradition. Harlem’s Paradise, which is tied to the family legacy of both Mariah Dillard Stokes and John ‘Bushmaster’ McGiver, is where the musical sensibilities of both clash. One of the secrets of the show is whoever looks down at the club from Cottonmouth’s ‘perch’ controls the music of the club and has reign over Harlem.”

Coker continues, “The music selection and the sequencing is a labor of love, and is one of the most important things I do as showrunner of this show. I love the fact that all of musical sensibilities meld with our storytelling and dramatic desires as a writer’s room, cast, and production crew. I get to be both John Wells and Quincy Jones.”

In Season 2 of the Netflix original series, Luke Cage (Mike Colter) has become a celebrity on the streets of Harlem with a reputation as bulletproof as his skin. But being so visible has only increased his need to protect the community and find the limits of who he can and can’t save. With the rise of a formidable new foe, Luke is forced to confront the fine line that separates a hero from a villain. Marvel’s Luke Cage is rated TV-MA and is streaming now only on Netflix.

Marvel’s Luke Cage Season 2 Original Soundtrack Album will be available for download and at streaming services on June 22. For more information, stay tuned to Marvel.com, @MarvelMusicInc on Twitter, and the official site for Marvel’s Luke Cage for all the updates.

Marvel Television develops and produces some of the world’s most creative and popular live-action and animated programming for broadcast and cable television networks plus digital platforms including a historic deal with NETFLIX. Its portfolio of self-produced series includes “Marvel’s Agents of S.H.I.E.L.D.” for ABC, “Marvel’s Runaways” for Hulu, “Marvel’s Daredevil,” “Marvel’s Luke Cage,” Emmy® and Peabody® Award-winning “Marvel’s Jessica Jones,” “Marvel’s Iron Fist,” and “Marvel’s The Punisher” for NETFLIX, and “Marvel’s Cloak & Dagger” (Freeform). Marvel is a co-producer on “Legion” (FX) and “The Gifted” (FOX). For more information, visit marvel.com. ©2018 MARVEL