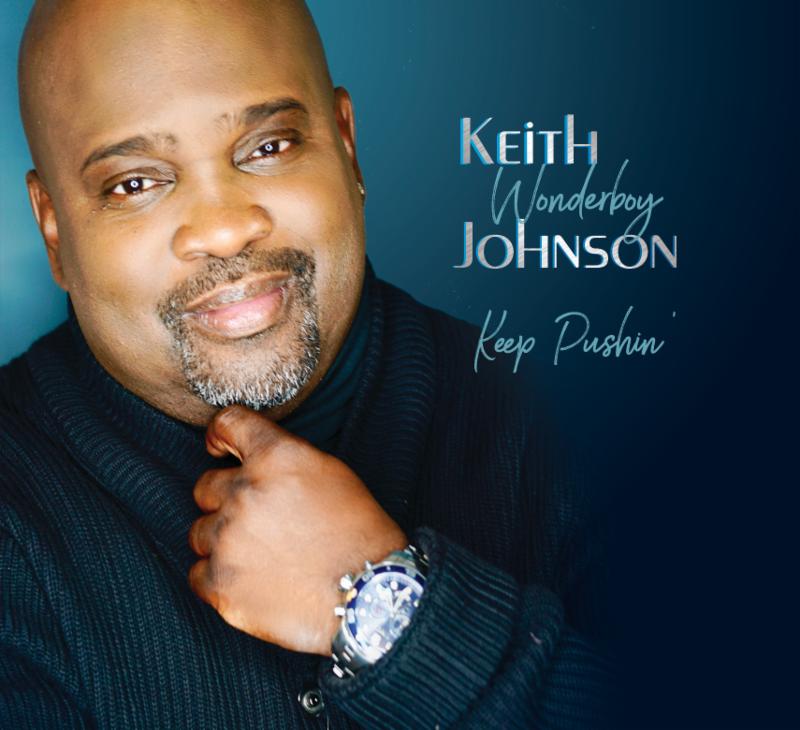 Keith “Wonderboy” Johnson‘s Keep Pushin’ delivers a wide-ranging, soul-satisfying set of songs that showcase his special ability to inject the timeless values of traditional gospel into contemporary settings. The title track, for instance, kicks off with quintessential old-school stomp that is driven with crackling rock guitar which drives home Keith’s message of perseverance. The lush and inspirational gospel ballad “God’s Gonna Do It” sets the stage for the updated quartet sound of “You Ought To Testify.” The latter echoes Keith’s 2013 smash hit “Let Go And Let God” featuring tight male harmonies that answering Keith’s riveting testimony. The variety of material on Keep Pushin’ range from the praise-and-worship balladry of “I’ll Praise Your Name” to the edgy and Prince-like funk of “God Is Able” which in spots is reminiscent of The Time’s hit “The Bird.” The memorable and lyrical melody of “The Man” harks back to Sam Cooke with The Soul Stirrers. Keep Pushin’ closes with “Do You Know How Blessed You Are,” a beautiful contemporary ballad, which encourages people to count their blessings in a world where it is so easy to dwell on what we don’t have. All in all, Keep On Pushin’ gives us the essence of Keith “Wonderboy” Johnson who has been a beloved figure by gospel audiences for more than two decades.

Keith “Wonderboy” Johnson’s introduction to the Gospel world at large came in 1998 with the release of Through The Storm. Since his arrival, he has steadily bridged the gap between generations of Gospel fans. His follow-up in 1999, Live And Alive, further catapulted him front and center as his composition “I Just Want To Be Right” became a Gospel anthem. The same year, Keith released his first Christmas project, Our Gift To You, which showcased a memorable version of the timeless favorite “12 Days Of Christmas.” He then went on to release five additional projects with World-Wide/Black Smoke Records, all of which charted on Billboard’s Gospel charts, and produced chart-topping singles. In 2005, he signed with Verity Records, releasing New Season, which reached #4 on the Billboard charts. The album’s beautiful single, “Let Go, Let God,” won BMI’s Most Played Song Of The Year Award in 2005.

Keith “Wonderboy” Johnson’s non-stop touring schedule has proven that he is one of the hardest-working and most in-demand artists in the Gospel music industry. He is on the road an average of 45 weeks a year! Keith’s quartet prodigy has sold over 500,000 units since the dawn of his career. In 2016, Keith released Timeless Music Movement Vol. 1 on his own record label, Wonderspirit Productions highlighting music from throughout this career. The recording features his hit single, “Chilly Winds” which is a modern version of his first hit single “Hide Behind The Mountain.” 2017 has marked a new chapter in Keith “Wonderboy” Johnson’s Wonderspirit Productions as he inked a marketing/distribution deal with long time childhood friend, D.A. Johnson’s SRT Entertainment. The pair has had some success together with the release of Keith “Wonderboy” Johnson Presents… The Rising Stars Of Quartet, which earned a Stellar Nomination. With the forthcoming release of Keep Pushin’, the best is yet to come as Keith “Wonderboy” Johnson continues to stir the masses and bless us with his music and ministry.