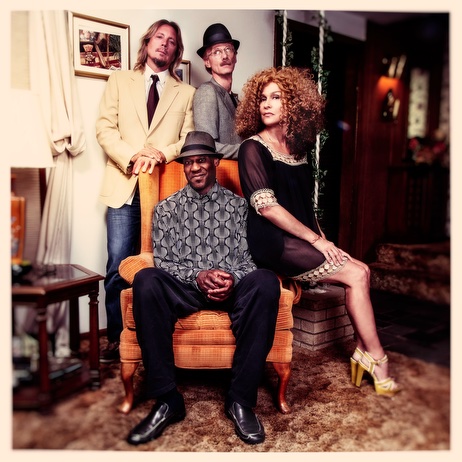 January 25, 2018 – For the very first time in over 30 years all 5 original members of The Family (now known as fDeluxe) will reunite in Minneapolis on for 2 not to be missed shows at The Dakota on January 31, 2018.

Jellybean Johnson, Jerome Benton and “St Paul” Peterson (all members of The Time during the ‘Purple Rain’ era), Eric Leeds (Madhouse, Prince & The Revolution, LP Music) and Susannah Melvoin, twin sister of Revolution guitarist Wendy have not performed together in Minneapolis since their now legendary, debut performance at First Avenue on August 13, 1985.

Formed by Prince in 1984, The Family’s debut, self titled set (released on Paisley Park Records, and featured the original recording of ‘Nothing Compares 2 U’) has been cited as an all-time favorite by artists such as Dam-Funk, Questlove, Chris Rock, Erykah Badu and D’Angelo to name but a few. Expect cult classics such as ‘Screams Of Passion’, ‘Mutiny’ and ‘High Fashion’ along with latter day fDeluxe material to be performed by the band during their 7pm and 930pm shows.

The band are extremely excited about having Jerome Benton join them during what is a very special time for Minnesotans. Actor and Musician Benton is an American Icon with a celebrated history of 30 over years of success in music and Hollywood. A Minneapolis, Minnesota native, Jerome became a star as part of The Time where he created the role of show “hypeman” which now is standard in many genres of music. His acting career began in 1984 with his pivotal role in the iconic film ‘Purple Rain’ followed by a lead role alongside Prince in the black and white cinematic feature ‘Under The Cherry Moon’. In recent times he has been responsible for the independently written, produced & assistant directed stage play ‘Love Makes No Sense’ starring Alexander O’Neal and Cherrelle, followed by a second stage project ‘I Want To Go To Heaven’. Jerome rejoined The Time in 2008 for a series of special concerts & was featured on the 2011 album release ‘Condensate’. He recently formed Thandiwe Entertainment Architects with writing partner Ilunga Adell.

“I’m happy to be invited to be part of these 2018 Super Bowl Celebrations in downtown Minneapolis just a few blocks from where I grew up,” says Benton. “I’m experiencing the music pallet that’s recognized around the world and that makes me proud. Joining my family and friends on stage is always special!”

Since resuming their recording career in 2010 as fDeluxe (minus Benton) has released the critically acclaimed studio albums ‘Gaslight’ and ‘AM Static’ along with a blistering concert set ‘Live & Tight As A Funk Fiend’s Fix’. They have performed sold out shows in Australia, Japan, England, France, Belgium and Amsterdam as well as in the native USA. Their performance at an all-star (D’Angelo, Chris Rock, Elvis Costello and more) tribute to Prince at Carnegie Hall in 2013 saw Billboard proclaim, “the show reached its funkiest echelon when fDeluxe came out to perform with the Roots,” while Village Voice described it as “a dominant appearance by fDeluxe whose high energy funk set was otherwise a master class in bass-driven grooves.”

In addition to 7pm and 930pm shows at The Dakota on 31 January fDeluxe will be performing a 30 minute set on the Verizon Up Stage at Super Bowl LIVE at 545pm on Thursday 1 February. Tickets to the Dakota show or the VIP Experience and Minneapolis Sound After Show Party featuring DJ Lenka Paris can be purchased on-line at www.dakotacooks.com or by calling 612-332-5299.