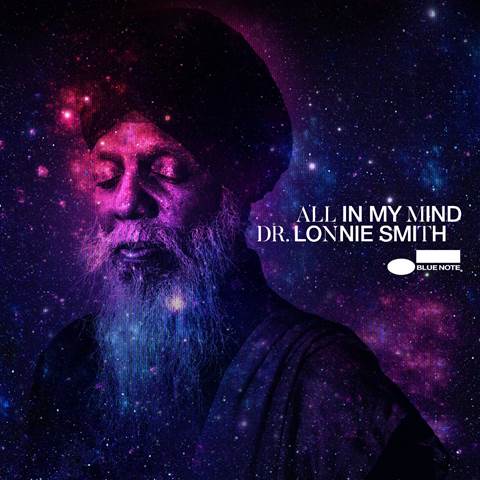 RECORDED DURING HIS 75th BIRTHDAY CELEBRATION AT JAZZ STANDARD IN NYC
SMITH WILL RETURN TO THE CLUB JAN. 11-14 TO CELEBRATE ITS RELEASE

Hammond B-3 organ legend Dr. Lonnie Smith has announced a January 12 release for All in My Mind, a spirited live trio album that the NEA Jazz Master recorded during his 75th birthday celebration at the Jazz Standard in New York City this past summer. The album is the follow-up to his acclaimed 2016 release Evolution, which marked Smith’s return to Blue Note Records where he first made a name for himself with a run of classic soul jazz albums between 1968-70. Hear the new track “Up Jumped Spring” on the playlist Dr. Lonnie Smith: The Finest which features Smith’s greatest Blue Note tracks as a leader and sideman, and can be streamed on Apple Music or Spotify.

READ OUR REVIEW OF “ALL IN MY MIND” BY BRENT FAULKNER BY CLICKING HERE!

At 75 years old Smith still reigns as a master of innovation and experimentation. He may have been away from Blue Note for 46 years, but he perfectly fits in with the current mission of label president Don Was to present the future movements of jazz as well as honoring those who forged the tradition. “Dr. Lonnie Smith returns to the Blue Note label with an album that reveals the enduring appeal of organ soul,” raved The Wall Street Journal in a 2016 review of Evolution, adding that the album “showcases a variety of organ-soul stylings [and] demonstrates the versatility and currency of the style.”

A connoisseur of groove and a consummate showman, Smith wanted to record All in My Mind in a live setting because, as he says, “It’s so hard to capture what I’m feeling at the moment in the studio. Hearing me live is catching me playing in the moment. It’s a good vibe. It’s a loving situation.”

“My group is a brotherhood, a dedicated family,” Smith says of his trio with guitarist Jonathan Kreisberg and drummer Johnathan Blake. “They are the heartbeat of the music. They know what I’m trying to do, and they enhance what I play. I play in the moment all the time, and they adjust and are there for me.”

All in My Mind opens with a powerful rendering of Wayne Shorter’s “JuJu” from the saxophonist’s 1965 Blue Note album of the same name. Smith also takes Paul Simon’s hit “50 Ways to Leave Your Lover” for a 10-minute joyride with drummer Joe Dyson taking a turn behind the kit, and reworks his own vintage composition “All in My Mind” which features the amazing vocal range and spirit of Alicia Olatuja.

Smith reflects, “You play life, you tell your story. I know who I am, and that means so much.” As for his return to Blue Note, he singles out Don Was who produced Evolution and All in My Mind. “I’ve worked with producers who don’t understand the musicians they’re working with. But Don wants me to be myself, he understands and respects creativity. It’s a reminder of the old days when Frank Wolff used to be the same.”

The track listing for All in My Mind is as follows: