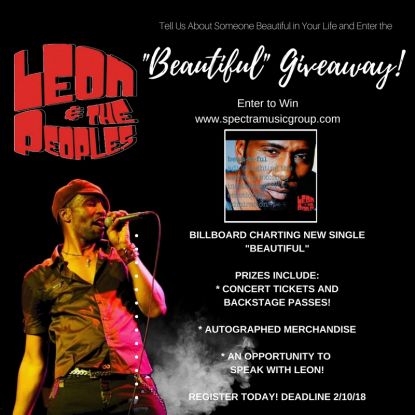 Tell us about someone “Beautiful” in your life and Enter the Leon & The Peoples “Beautiful” Giveaway! LISTEN to new single by clicking HERE!

Leon leads the group, Leon & The Peoples, which has a signature style that combines Reggae and Soul and carves out a genre that is all of their own. Leon passionately leads the band with his smooth, sultry vocals and heartfelt lyrics, while The Peoples feature top-notch musical talent from across the globe. The unique creation results in high energy live performances and a commitment to bringing their Reggae-Soul infused music to a worldwide audience.

Leon is no stranger to music on the silver screen having portrayed David Ruffin in the hit Mini-Series “The Temptations” based on the legendary Motown super group, “The Five Heartbeats” and as “Little Richard” in the authorized biopic both which were directed by Robert Townsend. You will also recognize him from the hit movies “Get Rich or Die Tryin'”, “Ali”, “BAPs”, “Waiting to Exhale”, “Cliffhanger”, “Cool Runnings”, and the hit TV show “OZ”.

The new single “Beautiful” recently hit the Billboard Hot Singles chart for several consecutive weeks, and in celebration of its success the Spectra Music Group is introducing the “Beautiful” Giveaway, an opportunity for fans to tell us about someone “Beautiful” In Their Life for an opportunity to win great prizes.

Click on the link to enter the “Beautiful” Giveaway Now: https://www.spectramusicgroup.com/beautiful-giveaway

– An Opportunity To Speak With Leon Himself

The official website for Spectra Music Group may be found at http://www.spectramusicgroup.com