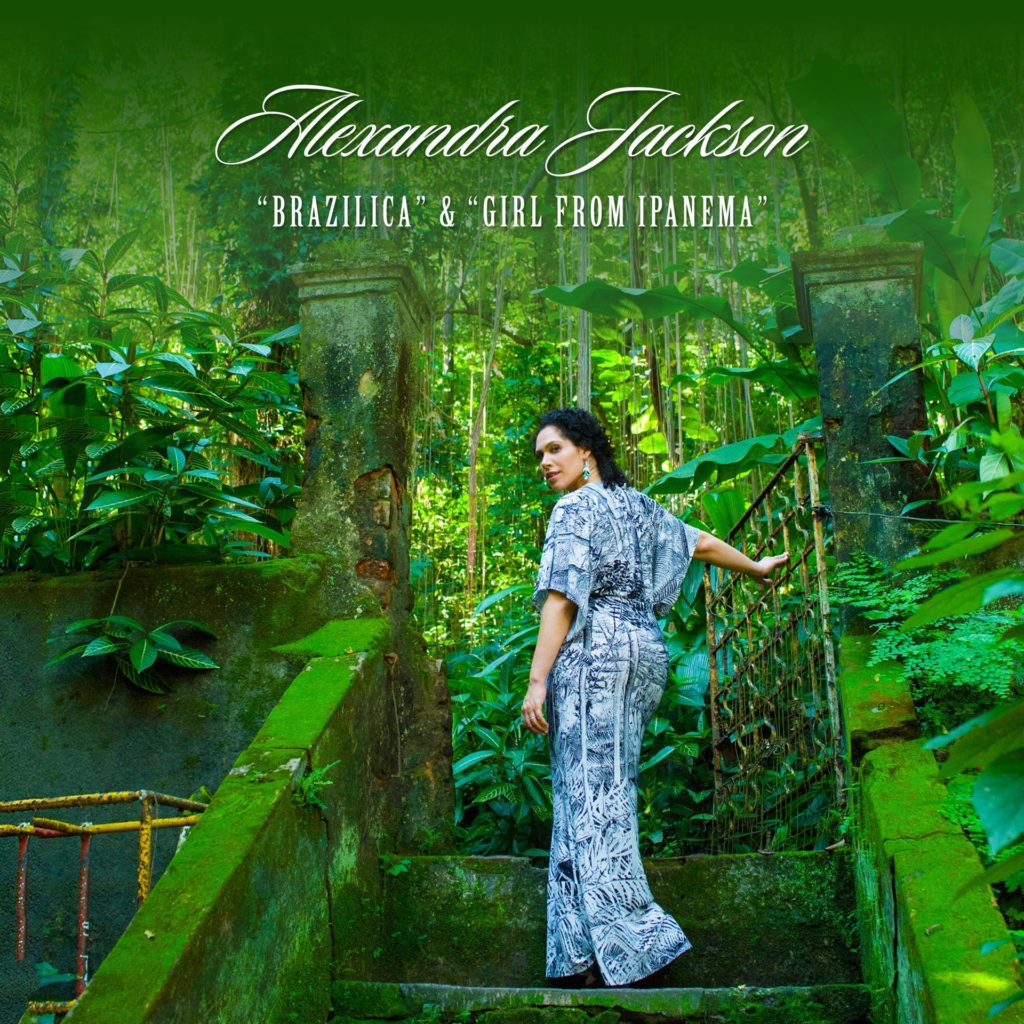 Today’s listening culture has been increasingly disrupted by a hybridization of styles and by globalization.

With a few clicks and some knowledge of Garage Band or ProTools, one can intermingle mid-80s Cambodian hip-hop, Norwegian jazz, Gamble & Huff-stylized Philly soul and classical music of the Andes. The most vital genre-blending in our global culture is being realized by the crosscurrents of different “cultural musics.”

What used to be deceptively termed “world music,” can now be described as the iconic Brazilian songwriter/singer Ivan Lins calls it – “total music…a blend of jazz, Brazilian, ethnic musics, instrumental, sung, completely modern.” One of the remarkable new artists giving voice to this fresh, undefinable sound is the dynamic and spirited vocalist Alexandra Jackson.

A three-year project in the making, Hebert, whose team was responsible for the career resurrection of drummer-bandleader Terri Lyne Carrington (following 20 years of no U.S. recording to becoming a multiple Grammy®-winner) along with Larry Williams, a Grammy-nominated producer, composer, arranger, and multi-instrumentalist for the likes of Sheila E., George Benson, Michael Jackson, Mika and Al Jarreau, Legacy & Alchemy features a wide range of Brazilian and American performers.

Brazilian music is close to the heart of Hebert, who has done business in Brazil for over a decade. He found in Jackson a fluent singer of English, Portuguese, Spanish and a similarly worldly individual to realize his vision.

Hebert says of Jackson, “I am reminded every day that, while musical talent and artistry are a given for success in the music industry, ‘ascending the ladder’ requires character, integrity, spirit, soul, heart, perspective, perseverance and giving. Alexandra has all these qualities in spades.”

Alexandra Jackson: Legacy & Alchemy takes various Brazilian music styles such as samba, bossa nova, MPB, axe, Euro bossa and others as a starting point, folds in the Chicago sounds of Earth Wind & Fire and Chess Records, with the sounds of classic and contemporary jazz and neo-soul. Coming off the 50th anniversary of the global craze for bossa nova (marked by Antonio Carlos Jobim’s “The Girl From Ipanema” Record of the Year Grammy® win in 1965), and 2017 marking the 100th anniversary of “Pelo Telefone,” the first widely cirulated samba recording, this album is a timely collaboration.

“There’s a huge melting pot of music in our world today,” says the Atlanta-based singer. “So this album offers the opportunity for people to step outside the box. It’s not just jazz, not the blues, not soul, not bossa nova, not samba, but it’s a mix of them all.” As such, different idioms of Brazilian music come to life in Jackson’s contemporary delivery of fifteen tunes on Legacy & Alchemy – each with an in-depth story as the backdrop – which, in essence, reaffirms the musical legacy of Brazil as a contemporary force.

Recorded in Rio de Janeiro, Los Angeles, London, New York and Atlanta and sung in English, Spanish and Portuguese, the tunes include many classics from the Brazilian bossa nova and samba canons.

In speaking about the first two singles “Brazilica” and “Girl from Ipanema,” Ms. Jackson says: “What a beautiful circle, having all these musicians together. These songs and the stories behind each are why I’m so passionate about this project,” she says. “I’m hoping to take this music and take it millions of people. 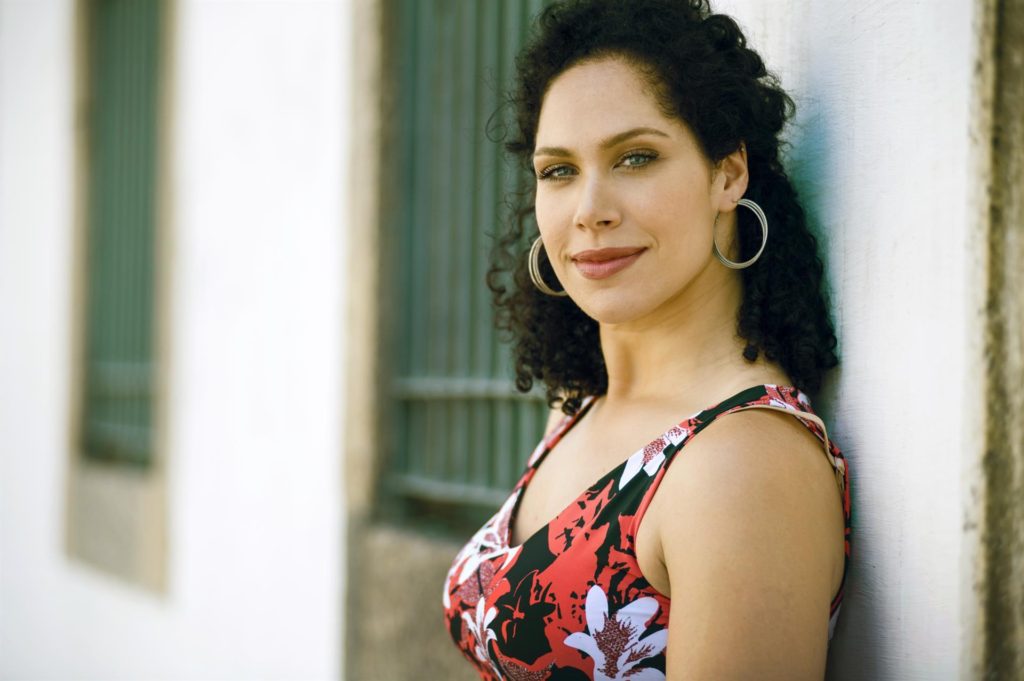 Preceding the release of Legacy & Alchemy, Jackson delivers a seven-song EP, now at jazz and smooth jazz radio and being released serially on streaming services including Spotify, Apple Music and Tidal. Two tracks are available now.

“Brazilica” debuted on the U.S. Smooth Jazz charts last week (November 12-17) as #1 most added, #1 SPINcreased at SmoothJazz.com, #1 most added at Groove Jazz Music, and #1 Most Added at RadioWave Internet airplay chart.

“THE GIRL FROM IPANEMA”

Thus, along with “Brazilica,” Ms. Jackson’s “Chicago-Samba Funk” version of the iconic “The Girl from Ipanema” was delivered to radio to kick off the promotion of the EP.

Given the breadth and depth of her debut album, Ms. Jackson’s background makes her the perfect actor to tell the great story of the evolution of cultures, and, in this instance, to communicate the synergies of Brazilian music and American music.

The youngest daughter of Atlanta’s first African-American mayor, the late Maynard Holbrook Jackson Jr., and businesswoman and NPR personality Valerie Richardson Jackson, Alexandra learned piano as a child and studied classical voice. At home she was influenced by the records her father would play: from The Blind Boys of Alabama to Take 6. Her mother loved Johnny Hartman and Phoebe Snow. And while soaking in Earth Wind & Fire, Michael Jackson and Maxwell, her older sister fostered in her a strong connection to Latin music and culture, including Celia Cruz, Marc Anthony and Gloria Estefan. Alexandra’s grand aunt was Mattiwilda Dobbs, the African-American coloratura soprano, who was one of the first black singers to enjoy a major international career in opera.

After experimenting with choral and musical theater, Jackson dove into jazz, attending the University of Miami’s Studio Music and Jazz Vocal Program. After moving to Los Angeles for a stretch, she returned to Atlanta and continued to pursue her singing. In 2013, she made an appearance at the Atlanta Jazz Festival as the opener for Me’shell Ndegeocello. At one point during her set, she sang in Portuguese the milestone bossa nova tune “The Girl From Ipanema.” In the audience was Hebert, who had known Jackson since she was a child, having worked for her late. He talked with her afterwards and noted that he loved her songs that brought together Brazilian music, American jazz and soul, and British acid jazz. While Hebert had this project in mind for several years, he never thought of an American singer for it.

When Jackson started working on Legacy & Alchemy, she contacted a Portuguese vocal coach for help in her pronunciation. “I didn’t know Portuguese well,” she says. “So I had to learn quickly because I wanted to honor the music I was going to be singing; knowing what the words meant and understanding the stories.”

With Legacy & Alchemy, Jackson recognizes her journey. “Robert took us through a lot of different stages,” she says. “With all the different collaborators, the project took on a life of its own. I didn’t see it coming. When I started, I was excited to put out an album singing the music I love. No one but Robert and Larry (Williams) could have known that it would turn into this. But I’m a firm believer that everything happens for a reason. Sometimes I was frustrated that the project was taking so long to complete, but then I realized that it made sense. And now the moment has arrived.”