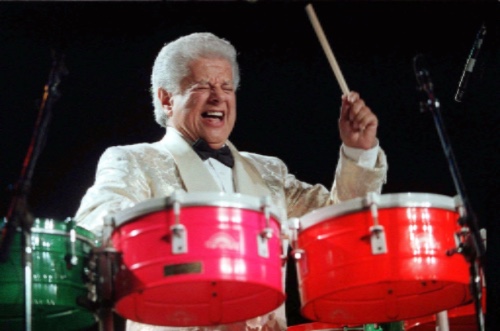 Hostos Center for the Arts and Culture Announces

The first ever multi-day comprehensive examination of the career of one of the most important figures in Latin Jazz through concerts, discussions, films, workshops.

(Bronx, NY) – In the first ever retrospective of the life and legacy of one of the most important figures in Latin Jazz, The Hostos Center for the Arts and Culture announces “Tito Puente: A Fifty-Year Retrospective of ‘El Rey,’ a multi-day, in-depth examination of his career through concerts, panels, film, dance, and more. With support from the National Endowment for the Arts, the retrospective, under the artistic direction of former Puente musical director José Madera, Jazz@ Lincoln Center Orchestra bassist / composer / arranger Carlos Henríquez, and Puente historian and archivist Joe Conzo, Sr., will take place from Thursday, April 20 through Saturday, April 22, 2017 at the Hostos Center for the Arts & Culture at Hostos Community College, located at 450 Grand Concourse (at 149th Street) in the Bronx.

Ernesto Antonio “Tito” Puente (April 20, 1923 – May 31, 2000) was arguably the most popular Latin artist of his time and many believe had the greatest influence on the Latin jazz art form, in melding innovative ideas related to jazz with the Afro-Cuban tradition of the mambo and other styles. With eight Grammys, 189 albums, and a career that spanned five decades, he was known for bringing Latin music to new audiences and as the composer of such hits as ”Oye Como Va’ and “Ran Kan Kan.” With an influence on the entire music field, he helped to promote the careers of many artists including singers Celia Cruz and La Lupe.

Tito Puente had a deep connection to Hostos. He performed at the Center many times and Hostos Community College maintains an archive of Puente memorabilia with posters, musical instruments, awards, photographs and recordings. For the past five years, the College has offered a continuing education course focused on the Latin Jazz master which has featured many former Puente band members and musical associates as guest speakers. A logical extension, the three-day event at Hostos will promote a greater understanding of this important artist and the art form he helped to create, engaging both hard-core Puente fans and those less familiar with the artist, with many multimedia and multigenerational activities.

The three concerts over the course of the retrospective will cover the entire career of Tito Puente. On April 22, 2017, the 18-piece Mambo Legends Orchestra, led by José Madera and which features many Puente Orchestra alumni, will perform the master’s music from his early years, 1950 – 1966 known as the “Palladium era,” For this event, Madera has transcribed and arranged material from the six different instrumental iterations of the Orchestra some of which has not been heard in over 50 years.

Preceding, on April 21, 2017, Jazz at Lincoln Center (JALC) bassist / composer / arranger Carlos Henríquez, who performed with Puente at the age 17 and regularly leads the J @ LC Orchestra, will premiere a 12-piece ensemble of musicians, performing a youthful take on Puente’s music. Focusing on the Latin Jazz Era from 1967 to 2000, the recreated charts will be from a period when Puente moved away from the 17-piece band and embraced smaller ensembles such as “the Golden Men” as well as from his recordings with the legendary singers Celia Cruz and La Lupe. In partnership with Lincoln Center Education, Henríquez will also lead a free family performance for all ages, teaching young audiences why Puente’s music continues to influence a new generation of fans.

The retrospective will also include workshops, a panel discussion, and a film, amongst other activities. José Madera, John “Dandy” Rodríguez, and other notable percussionists will lead a percussion workshop, open to the public. A panel discussion, “Don’t Call it Salsa: The Legacy of and Impact of Tito Puente on Latin Jazz” will feature music historians and musicians, and the PBS documentary “Tito Puente: the King of Latin Music,” will be screened with a talk-back after. Hostos will create a listening room, where Joe Conzo Sr. will play never before heard selections from his personal collection of more than 6,000 Puente live recordings. The Tito Puente Legacy Project, the archive that includes posters, photographs, awards and musical instruments of the bandleader, will be open throughout the weekend and a tour will be available.

A full schedule of dates and times will be released in late February.