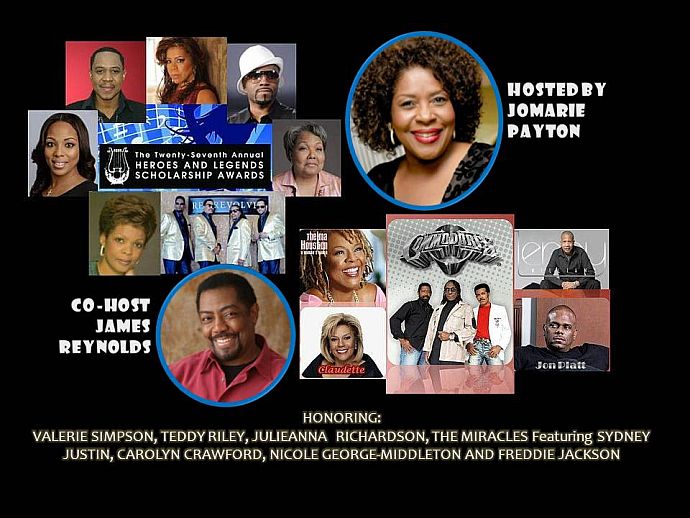 BEVERLY HILLS, Calif. – Aug. 24, 2016 – PRLog — The Heroes and Legends Foundation has announced the honorees for the 27h Annual Heroes and Legends Awards, which will be held on Sunday, September 25th, 2015 at the legendary Beverly Hills Hotel. This year’s honorees include Valerie Simpson, Teddy Riley, Julieanna Richardson (History Makers), Nichole George-Middleton, (ASCAP), Freddie Jackson, Carolyn Crawford and The Miracles featuring Sydney Justin with a special tribute to Smokey Robinson & the Miracles. The entertaining JoMarie Peyton is back as Master of Ceremonies, and James Reynolds of the daytime soap, Days of Our Lives will co-host. Presenters and performers for the show include Thelma Houston, Claudette Robinson, The Commodores, Lenny Williams, and many others.

Valerie Simpson is half of the renowned songwriting/performing/producing team Ashford and Simpson. Their award winning collaborations began four decades ago and she, along with her late husband Nick Ashford, have penned classic hits such as “Ain’t No Mountain High Enough,” “You’re All I Need to Get By,” “Reach Out and Touch Somebody’s Hand,” and “I’m Every Woman” just to name a few. A multi-instrumentalist musical child prodigy at age 5, Grammy/Multi-Platinum Music Producer/Composer/Arranger/Songwriter Recording Artist Teddy Riley has one of the most impressive and solid legacies in the music industry. Forming the music group “Kids at Work” while in his early teens, Riley began composing and producing tracks and compilation albums for numerous rappers and recording artists including Doug E. Fresh and Kool Mo Dee. He has since become one of the most highly sought after composer/producer/songwriters in the business with Billboard chart topping, award winning RIAA certified hits and LPs for his Multi-Platinum hit group Guy, Johnny Kemp, Bobby Brown, Heavy D., The Winans, Wreckx-N-Effect, Snoop Dogg, Whitney Houston, MC Hammer, Jay-Z, NSYNC, New Kids on the Block, Robin Thicke, Boys II Men, Lady Gaga and an extensive list of others. Freddie Jackson rocketed to fame with the release of the R&B classic, “Rock Me Tonight” in 1985. The song spent six weeks at number one, and made Jackson an instant hit on urban contemporary radio. “You Are My Lady” gave him a second straight R&B chart-topper, and became his signature hit.

The 2016 HAL Awards’ star-studded event annually honors a select group of individuals who have brought honor and dignity to all forms of the arts, as well as awarding scholarships to deserving students of the arts from the Southern California area. The HAL Awards are the brainchild of famed songwriter and Motown Alumna, Janie Bradford. Bradford has written such classic hits as Marvin Gaye’s “Too Busy Thinkin’ About My Baby,” Barrett Strong’s “Money. That’s What I Want” and countless others. “Helping talented young adults realize their lofty, but attainable dreams of shaping careers in one of the many performing arts is our objective,” explains Bradford. “We do this by providing much needed scholarship funds. Each year our scholarship honorees are selected from a diverse group of candidates who exhibit an extraordinary amount of talent, drive and determination.”

Tickets for 27th Annual Awards Dinner are $275.00. The cost for attending all of the weekend’s events is $375.00, and tickets are available online. All proceeds benefit the Heroes and Legends Foundation to provide scholarships to college-bound students of the arts. Tickets can be purchased either by contacting the Heroes and Legends Foundation Office at 310.274.1609 or by visiting http://www.halawards.com/tickets.html. Patrons will be able to purchase tickets to the black tie gala, which will be held at the Beverly Hills Hotel on September 27th as well as tickets for the full weekend of award-related activities:

For more information on the HAL Awards, please visit our website: halawards.com or call 310.274.1609.