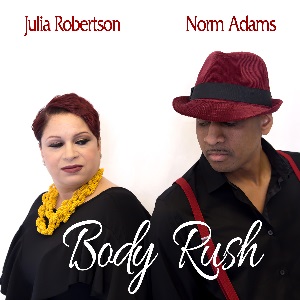 “Body Rush” is the debut ballad from Julia Robertson & Norm Adams. The R&B single has been compared to the great soul duets of the 80’s and 90’s and features Julia Robertson (formerly of the 90’s quartet Ex Girlfriend) and balladeer Norm Adams.

NEW YORK – June 6, 2016 – PRLog — Julia Robertson achieved fame in the 90’s, as part of the female R&B group Ex-Girlfriend. The New York based quartet, comprised of Julia, Tisha Hunter, Monica Boyd and Stacy Francis (X Factor USA season one finalist, and R&B Divas L.A. season three) was formed by the legendary R&B group Full Force, whose production credits include chart toppers by Lisa Lisa and Cult Jam and Backstreet Boys. Signed to Warner/Reprise Records, Ex- Girlfriend’s debut album, “X Marks the Spot”, yielded the hit singles “Why Can’t You Come Home?”(Billboard #5 U.S. R&B), and “You (You’re The One For Me)”. The girls toured the world in support of the album, opening for superstars such as R. Kelly and Prince. A year later, they contributed the song “Colorless Love” to the soundtrack of the film Zebrahead.

Currently, Julia is putting the finishing touches on her debut solo album, “The Audio-biography of Julia Robertson“. The album brilliantly showcases her transformation from R&B ingénue, into a mature artist, firmly in control of her own destiny.

Norm Adams is a singer-songwriter, whose creative style has often drawn comparisons to Babyface, Ne-Yo and Bruno Mars. He began his professional music career as the lead singer of an R&B group called Mass Appeal. Although widespread commercial success eluded the trio, a dance remix of their independent record “A Little Bit of Heaven” (featuring Kima from the female R&B group Total), made the rounds on the club scene. This led to radio airplay and a review in Billboard. The exposure opened the doors to a whole new world for Norm, as he traveled to Japan, and performed nightly in front of wildly enthusiastic crowds. His debut solo album, “This Is My Time”, was produced by Grammy nominated producers Ric Zivic and Ted Wender, and included the Top 10 indie record, “Love Me” (MWR UK #7), and the dance floor filler “Stretch Ya Neck”, whose video was designated by Yahoo as a “must see” .