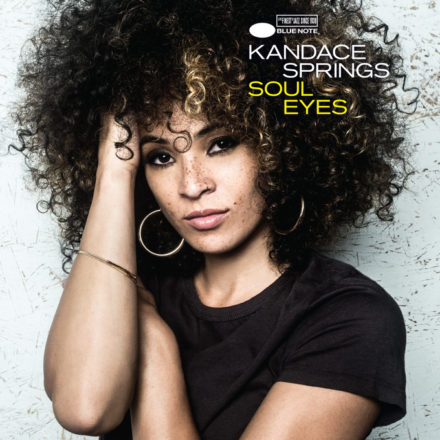 On June 24, singer, songwriter and pianist Kandace Springs will release her debut full-length album Soul Eyes on Blue Note Records. Produced by Grammy-winning producer Larry Klein (Lizz Wright, Melody Gardot, Joni Mitchell, Herbie Hancock), the album touches upon soul and pop while channeling her jazz influences as well as her Nashville upbringing. Kandace counts such stylists as Billie Holiday, Ella Fitzgerald, Nina Simone, Roberta Flack and Norah Jones as her heroes, but as evidenced by Soul Eyes, she mimics none of them.

Kandace’s journey to discovering her uniqueness didn’t happen overnight. In fact, her 2014 self-titled debut EP had a decidedly contemporary R&B/hip-hop bent with production by Pop & Oak. The EP was incredibly well-received, and Kandace performed on Late Show With David Letterman, Jimmy Kimmel Live and The Tonight Show Starring Jimmy Fallon, as well as making appearances at the Afropunk and Bonnaroo festivals.

Read Our Review of Kandace Springs’ EP by Brent Faulkner by Clicking HERE!

As amazing an experience as that was, as she got ready to record her album she couldn’t shake the feeling that she wasn’t yet singing her true self. Conversations with her longtime producers Carl Sturken and Evan Rogers led to soul searching and rethinking her musical direction. For Soul Eyes, Kandace continued working closely with Rogers and Sturken, but they also recruited Klein to help the singer bring out her distinctive artistic traits. “Larry wanted me to be free in the studio,” Kandace recalls. “I’ve been through a lot of other sessions in which the producer tries to take control of your sound. Larry was just like, ‘Go in and play what you feel.’ That ultimately led to the best outcome; he captured this record perfectly.”