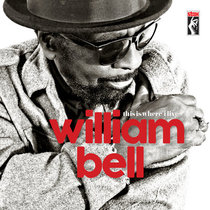 Soul Titan William Bell Returns To Stax For First Major Release In Decades With This Is Where I Live (June 3), Produced By John Leventhal

Legendary soul singer and songwriter William Bell has returned to his original home, Stax Records, for the appropriately titled This Is Where I Live, his first major release in almost four decades, out June 3rd, 2016. Known for writing and performing several soul standards – “You Don’t Miss Your Water, ” “Private Number, ” “Every Day Will Be Like a Holiday, ” and “I Forgot To Be Your Lover” among them – Bell co-wrote most of the songs on This Is Where I Live with GRAMMY-winner John Leventhal, who also produced the album. Additional co-writing contributors are Marc Cohn, Rosanne Cash, Cory Chisel and Scott Bomar.

This Is Where I Live features newly-penned liner notes by music historian and author Peter Guralnick, who observes that the album “convey[s] home truths from a perspective of age and experience that might not always have been readily apparent to a younger man.” The performances, likewise, are assured and subtle, yet simmering with tension.

“At my age, ” says Bell, who is 76, “I’ve had a lot of experience, and I know what my limitations are, what my faults are as a human being, and I utilize that. When I approach a lyric or a melody, I’m brutally honest.”

That approach is immediately apparent on album opener “The Three of Me, ” which features a classic William Bell conceit as he catalogs the different sides of a man who has loved and lost.

William Bell’s career started in the 1950s when he joined the Phineas Newborn Sr. band as a teenager. He signed to Stax in 1961 and delivered one of the iconic soul label’s earliest hits with “You Don’t Miss Your Water.” He also co-wrote, with Booker T. Jones, the iconic song “Born Under A Bad Sign” for Albert King, which was later famously covered by Cream. In more recent years he has been covered by Carole King, sampled by Kanye West, and feted by Snoop Dogg. He has performed everywhere from Bonnaroo to The White House, and will play a select run of dates with John Leventhal and his band around the release of This Is Where I Live, to be announced soon.