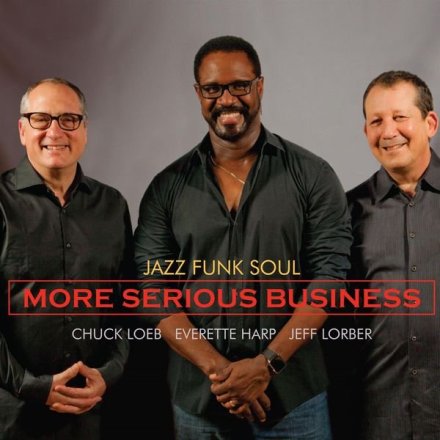 While humanity has long marveled over the Seven Wonders of the World, super-group Jeff Lorber, Chuck Loeb and Everette Harp, easily stand as high priests in the temple of contemporary jazz. These three colossal architects of the contemporary jazz scene have collectively sold millions of records, amassed numerous prestigious industry awards and produced or shared the stage for some of the biggest names in music including U2, Bob Dylan, Aretha Franklin, Miles Davis, Stan Getz, The Isley Brothers, Billy Joel and Chaka Khan, to name a few. Just in time to kick off 2016 on the right note, Lorber, Loeb and Harp have crafted the perfect soundtrack, More Serious Business. The new CD is a follow up to their heralded 2014 recording Jazz Funk Soul. After spending time on the road with one another, the band made it a mission to recreate the high octane energy that their fans have enjoyed in their live shows on CD. “Recording these CDs seemed like a natural extension of the fun and high level of creativity that was taking place on stage each night,” shares Chuck Loeb. “I love this aggregate of players,” declares saxophonist Everette Harp. “We are very different personalities, but we all respect where each other comes from.” Pianist Jeff Lorber adds, “After collaborating on the road, it became clear that the chemistry and complimentary talents we had should be used to make a great record. This is the first time I’ve recorded in a band situation with other leaders and I found it to be a rewarding experience.”

Jazz Funk Soul is like a cosmic musical reaction resulting in the perfect amalgamation of jazz, R&B, soul and funk that swings from the opening note to the album’s final chorus. Each a dazzling virtuoso, accomplished bandleader, composer, arranger and producers in their own right, Jeff Lorber, Chuck Loeb and Everette Harp join forces to produce ten memorable originals with sublime arrangements that defy category. More Serious Business is replete with irresistible melodies, unforgettable grooves, exhilarating solos and charged interplay. Using each song as a springboard to challenge their creativity, More Serious Business, marries the best elements of diverse musical styles to create a cohesive set and brilliant musical dialogue between three trailblazers. Highlights include the jubilant and funky “Tuesday Swings,” the tender sultry ballad, “The Love,” and the album’s irresistible lead single “You’ll Know When You Know.” More Serious Business affirms that Lorber, Loeb and Harp have an agenda and that it is all in the groove!

Chuck Loeb sums it up best, “The Music is fresh, inventive, and just plain fun. Collaboration is at it’s best when the result is greater than the sum of its parts and I think that’s what we got here – Jazz Funk Soul!”