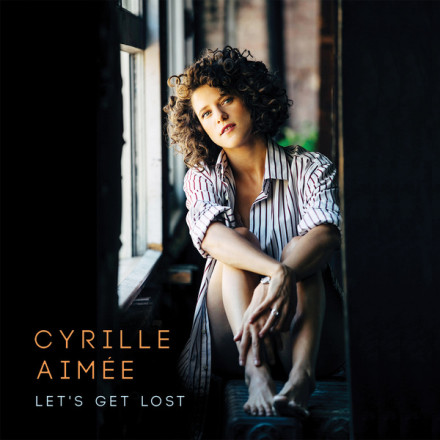 Let’s Get Lost, Cyrille Aimée‘s second album for Mack Avenue Records brings to light a different side of the radiant singer. After two years of dazzling audiences around the world with the joyful repertoire of It’s A Good Day, Aimée reflects on her musical and personal growth, telling us the story of a nascent love coming to full bloom. Accompanied by two guitar wunderkinds, Adrien Moignard and Michael Valeanu, as well as an Australian rhythm section (consisting of bassist Sam Anning and drummer Raj Jayaweera) so tight-knit that they are almost the same person, she adds pensive touches to her usual zest and reveals a bittersweet depth that will have listeners daydreaming for a while.

Let’s Get Lost speaks of love in three different languages, wide ranging references, oldies and odd metered originals, yet it retains a distinct identity, like summer grass freckled with late afternoon sun. Aimée and her band weave confidently from one musical region to the next, and Valeanu’s guitar arrangements always underscore the meaning of every word in uncontrived and subtle fashion. “This album owes a lot to him,” Aimée adamantly states. Moignard is full of swagger and humor, and Fab Dupont’s production and sense of form brings every refinement to the forefront. “Fab helped us transition from being a live band to really shaping the songs for the studio.” With a strongly cohesive team, and a dizzying momentum, Cyrille Aimée takes us on a thoughtful promenade and it seems there’s much left to discover about her.

About Cyrille
Aimée was primarily raised in France by a French-Dominican parentage. As a curious child in Samois-sur-Seine, she would sneak out of her bedroom window to wander into the nearby gypsy encampments filled with those attending the annual Django Reinhardt Festival. She quickly fell in love with the gypsy music and way of life and in the years later she would sing on street corners with musician friends while traveling across Europe. While in the midst of one such odyssey, she found herself at the Montreux Jazz Festival, where she won first prize in the 2007 vocal competition—which included the financing of her first self-produced album.

When Aimée auditioned for the French version of American Idol, she became a finalist. Informed she would have to sing only what she was told, her gypsy spirit rebelled—and in what was a cause célèbre she walked from the competition.