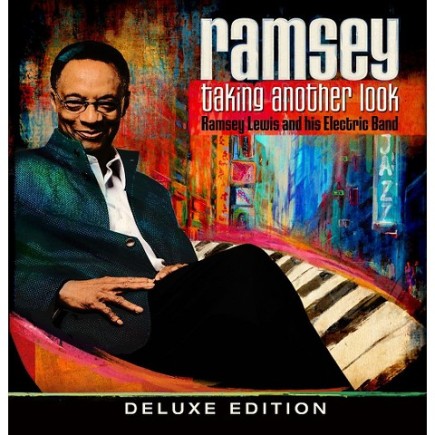 CHICAGO, IL  – Three time Grammy® Award winner, Ramsey Lewis, will release “Taking Another Look – Deluxe Edition” on his new Sony/RED distributed label “Ramsey’s House.” On the album, Lewis rekindles his 1974 career-defining album “Sun Goddess” through a collection of re-recorded or re-edited tracks from the original disc perfectly balanced with five new tunes, in addition to Dr. John, Kung Fu, and TAUK adding their spin on some of these timeless classics. “Jungle Strut” has all the attitude of its 1974 original and Lewis makes magic on the Fender Rhodes in “Tambura.” Rather than re-recording the title track “Sun Goddess”, Lewis has beautifully re-edited the original studio recording featuring Earth, Wind and Fire. Lewis and his Electric Band breathe new life into classic covers, such as the new high-octane rendition of Stevie Wonder’s “Living for the City” and a tender interpretation of the timeless “Betcha By Golly Wow.” The album features Ramsey’s touring quintet (the Electric Band) composed of Joshua Ramos (bass), Charles Heath (drums), Henry Johnson (guitar) and Tim Gant (keyboards).

“I’ve recorded maybe 70-80 albums, and this album is definitely among the top five.” said Lewis.

The “Deluxe Edition” title refers to the three bonus tracks and the previous limited release of the record. First, the legendary Dr. John serves up some Cajun style funk with his rendition of “Jungle Strut” and then up and comers and jazz fusion funksters Kung Fu turn in a mesmerizing version of “Tambura.” Finally, TAUK delivers an amazing take on “Sharing Her Journey” that clearly establishes them as a band to watch in the jazz influenced jam band world.

Ramsey’s House is the innovative new label conceptualized by Lewis to help up and coming jazz influenced acts and to introduce fresh faces to the jazz world. The label is planning multiple releases per year and all A&R decisions and label signings are personally overseen by Lewis. The National Endowment for the Arts Jazz Master Award winner believes that there is a lot of great new talent out there, traditional and non-traditional, that will revitalize the jazz world he loves so dearly.