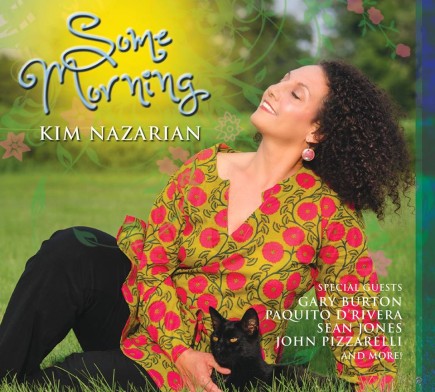 LOS ANGELES – Oct. 13, 2015 – PRLog — “SOME MORNING” is the first solo project by Grammy nominee Kim Nazarian. Kim gained fame as a founding member of the internationally acclaimed jazz vocal group, New York Voices, but this album focuses on Kim’s exquisite voice and her partnership with her husband, the five-time Grammy Award-winning producer and trombonist Jay Ashby. The CD features a mix of standards, not-so-standard standards, and several original tunes.

Kim is one of the most accomplished singers on the scene today. Her vocal skills are second to none. She can sing a ballad with great depth and immediacy or scat with a fluid proficiency that reveals her exceptional harmonic sophistication. Her vocal choices are never burdened with extraneous ornamentation. Always tasteful and appropriate, her approach to melody, time, and dynamics is chosen to enhance the lyrics while imbuing each song with her own personality, truly making them her own.

All the tunes on this CD are arranged in whole or in part by Ashby. He is also featured on trombone on several tunes, including the opening medley “Robbins’ Nest/Boneology.” Kim and the band swing hard, with voice and trombone blending seamlessly during the high speed soli. Ashby is also featured on “What’ll I Do,” the poignant anti-war tune performed and arranged with great pathos by Kim and Jay. Jamey Haddad on drums creates a martial feel against which Kim sings with a deep sorrow expressed through long, plaintive phrases and a rising dynamic that are echoed by Ashby’s trombone.

Kim has strong family ties, and other family members are featured on several tunes. “Que Sera Sera” is a true family affair. It features Greg Nazarian, Kim’s father, on saxophone with vocals by Ian Ashby, Kim and Jay’s son. Ian sings the part of the child asking questions about the future. His sweet, young voice captures the innocence at the heart of the tune, while Kim sings the mother’s knowing refrain with hopeful high energy, assuring her child that there’s nothing to worry about. Marty Ashby, Kim’s brother-in-law, is also featured on guitar on several tracks, taking a solo on Cole Porter’s romantic “So In Love.”

Besides being a superb vocalist, Kim is a top-notch lyricist. “Still Life,” composed by Kim and Jay, was originally written in memory of Ian’s elementary school art teacher. Kim dedicates her graceful, imagistic lyrics to the many loved ones, friends and colleagues that have passed from her life over the years. Kim’s heartfelt interpretation is further enhanced by the exquisite accompaniment of pianist Alon Yavnai. “Road to Kursk” is another composition by Ashby. It is a blues inspired by a road trip from Moscow to Kursk, Russia. This swinging big band tune features spot on scatting by Kim and a searing trumpet solo by Sean Jones. It also features the legendary drummer Roger Humphries.

Kim has been in the music business a long time and over the years has performed with many jazz luminaries, some of whom were more than happy to participate in this venture. Paquito D’Rivera adds a sensitive clarinet solo to “Tell Him I Said Hello.” Kim said she chose that tune because “the lyric just breaks my heart.” It has a lovely, haunting arrangement featuring Marty Ashby on guitar, Alexa Still on flute, Anna Nelson on clarinet, and Jess McCandless on bass clarinet. John Pizzarelli plays guitar and sings with Kim on “Gotta Be This Or That,” where the interplay of their voices on the original vocalese section adds a playful and hip dimension to the tune. “Some Morning,” the title track, is a lovely re-interpretation of an Ivan Lins song with new lyrics by Brock Walsh. It features vibraphonist Gary Burton and a background vocal group featuring Alysia Tromblay and Kim’s fellow New York Voices member Peter Eldridge, as well as Ashby.

Mark Soskin and Mark Shilansky alternate on piano throughout the album. “All in My Heart” is an original composition by Shilansky, which he saved to debut on this CD. His expressive, textured solos can be heard on several of these tunes. Soskin’s tasteful piano work provides a rhythmic backbone to tunes like “Road to Kursk” and “Que Sera Sera,” while his joyful solo can be heard on the opening number “Robbins’ Nest.”

This CD was a long time in the making. Kim wanted to make sure that her first solo project truly reflected who she is as an artist. To anyone not familiar with Kim, “SOME MORNING” is a significant introduction to the scope of her talents – from singing to writing lyrics to arranging. Music is Kim’s life, and she hopes that this project will expand her already highly successful career and lead to opportunities to tour with her family. For Kim, music and life are all about love, truth and balance … and family; which include ALL the members of her professional, musical family.

Available on Amazon and iTunes.