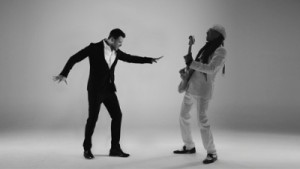 Emin to Embark on Take That European Tour in October

The single, produced and co-written with Danish writer/producer Cutfather and his team, premiered in the UK earlier this month on BBC Radio 2. The track has also debuted at #3 in the Music Week UK’s Pop Club Chart.

Emin says having Nile Rodgers perform on the song is a dream come true: “I’ve admired Nile’s music for years. He’s played on and produced so many hit records — not least one of my favorites, Daft Punk’s ‘Get Lucky.’ I feel totally privileged to have him on my new single.”

Nile, who’s currently topping the charts with Duran Duran, describes meeting Emin in NYC earlier this year: “From the first moment we met, it’s been like a boomerang: we just kept coming back to each other. But it’s been that way with all the big music collaborations I’ve had. A chance meeting, you get this vibe and the next thing you know, you’re making a record. It was that way for me with Bowie, Madonna, the B52’s, INXS and, now, Duran Duran.”

Emin will kick off promotion for the new single, and his current album MORE AMOR, by joining UK supergroup Take That for a series of European arena shows on the next stage of their sell-out world tour next month. Tour cities include: Munich, Oct 5; Amsterdam, Oct 7; Berlin, Oct 8; Zurich, Oct 12; and Milan, Oct 13.

Emin is one of Russia’s top music performers, having recently won that country’s equivalent of a Grammy and MTV Award as well as a 2014 World Music Award. In 2012, he was guest performer at the Eurovision Song Contest and the following year appeared as guest performer alongside Aerosmith’s Steven Tyler at the Miss Universe pageant.

He divides his time between Moscow, London and New York City.