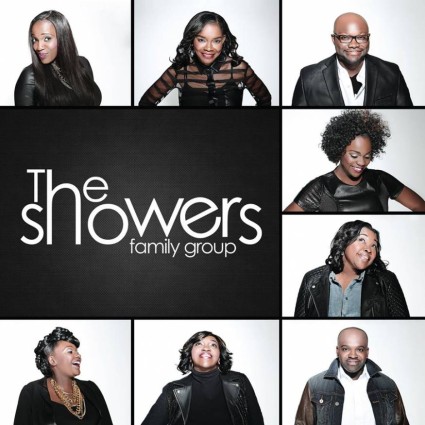 PRLog – March 13, 2015 – ATLANTA — After capturing national attention as one of gospel music’s newest family supergroup, The Showers will release their long awaited, self-titled sophomore release on April 21, 2015, brought to you by AP Records and distributed by Habakkuk Music. Already taking the industry by storm with their signature blend of harmonies, the Louisiana’s native’s new project boasts a blend of new music that is sure to cement their success as a group that will be around for the ages. This uprising family group can be compared to popular gospel singers, The Clark Sisters.

The album kicks off with the lead single “Better,” written and produced by Deon Kipping who has penned titles for Marvin Sapp, JJ Hairston, and Jessica Reedy. Immediately becoming a fan favorite for its heartfelt lyrics; the tune not only demonstrates the group’s musical diversity; the song highlights their vocals. The album features top notch vocalist; Grammy nominated gospel Artist Lowell Pye, who is featured on “Jesus You Died Only”, powerhouse production by Bruce Robinson Jr.(Latice Crawford, Fantasia), Shawn Willis, who lead vocal production, Deon Kipping, who wrote and produced on album and last, Grammy winning producer, Myron Butler who blessed the album with vocal production. The breakout hit of the album is “Better”, with a dynamic feature from multi-talented gospel artist Canton Jones.

“Better ” joins a host of noteworthy numbers found on The Showers self-titled album that include hand-clapping praise tunes, groovy rhythm and praise, and uplifting worship songs filling out a tracklist of dynamic, high-spirited tunes that are sure to engage listeners in an unapologetic praise-fest; this album comes as another impressive venture on the group’s resume. Music lovers first took note of the group on the Shawn Willis produced “Praise Your Way Through”, which was their freshmen single. The group was blessed to perform this track on Dr. Bobby Jones show in 2013. Since then, their talents have taken them all over gospel music well liked by fans and on stages in front of some of the industry’s most revered acts including Donnie McClurkin, Kelly Price, BET’s Dr. Bobby Jones, Tamela Mann, Jessica Reedy, Deon Kipping and more.

Join the Showers as they invite listeners to join them on their new musical journey, which is more poised than ever to lift their talents to their highest heights. The Showers will host an advance listening session of their new project during the Stellar Awards weekend in Las Vegas, Nevada on Friday March 27, 2015 at The Tone Factory at 12:30 pm. Following with album release concert, April 10th at Greater St. Stephen FGBC in New Orleans, LA. The celebration will begin at 6pm, concert will begin at 7pm and meet & greet immediately following, approximately at 10pm. April 7th, supporters can pre-order album including free track of single “Better” featuring Canton Jones.

To purchase tickets for The Showers release concert, please follow link here https://www.eventbrite.com/e/the-showers-cd-release-conce…. For sponsorship opportunities contact Graham@ap-records.net. Daily updates and information on The Showers can be found on numerous digital platforms and social media: @The_Showers on Twitter and @theofficialshowers on IG. Facebook/theofficialshowers. Website: http://www.TheShowers.org