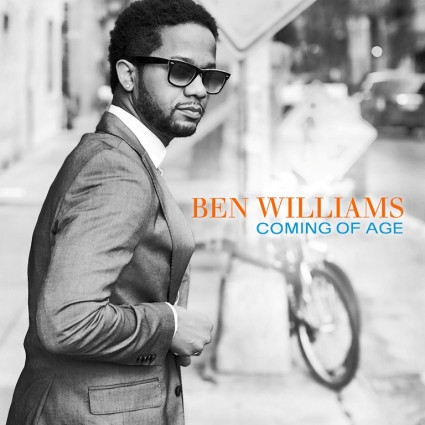 ALBUM AVAILABLE ON CD AND VINYL

For Immediate Release – Acclaimed bassist Ben Williams delivers his sophomore album titled Coming of Age, April 21, 2015, on CD and vinyl via Concord Jazz. Continuing to implore the common elements of jazz, hip-hop, rock and soul, the young bandleader embarks on a bolder journey in this album with more music by his own hand and a reflection of his new outlook as a seasoned musician. Coming of Age for the 30-year-old Williams means playing a lively role among his peers and a vital part in the music world at large. Winner of the 2009 Monk Institute Competition, Williams cites this as a turning point in his musical odyssey, “My career as a bandleader and composer started from the moment I won,” he says. “I had this opportunity to say something—and an obligation, too.” The CD and vinyl are now available for pre-order on Amazon. (CD and vinyl).

Revered by The Washington Post as “Successfully translating the musical pulse of his era into jazz,” Williams has secured a masterful selection of special guests featured on this project. They include renowned jazz trumpeter Christian Scott on the cover of Lianne La Havas’ melancholy “Lost & Found” that is draped by a string quartet, vibraphonist Stefon Harris on an original piece titled “The Color of My Dreams,” and emcee/poet W. Ellington Felton who leads the listener through “Toy Soldiers (reprise).” Williams also reconnects with American soul singer Goapele for a second collaboration with the pivotal anthem “Voice of Freedom (for Mandela).” Completing the vision is Williams’ band, Sound Effect, comprised of Marcus Strickland (tenor and soprano saxophone), Matthew Stevens (guitar), Christian Sands (piano and Fender Rhodes), Masayuki “Big Yuki” Hirano (synths and Fender Rhodes), John Davis (drums) and Etienne Charles (percussion).

The CD offers eleven tracks with nine original compositions by Williams and the rare vinyl addition offers eight pieces from the CD’s repertoire, including a free download of all eleven tracks. Showcasing his impeccable talent for acoustic and electric bass, this album creates an experience that demands to be heard by a wide breadth of generations.

Tour dates to be announced.