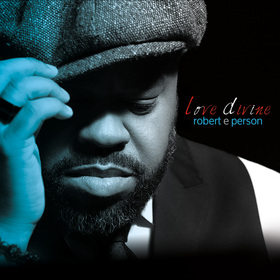 Washington DC — An intense feeling of deep affection and personal attachment for another person…that’s Love. An even greater love is the Love of Christ. HIS love is a gentle continuous flowing river of compassion, deep affection and concern, and it is because of His Love and attachment to us that we can love one another. Robert E. Person‘s desire is to share this message with an all new musical installment focused on the divine love of God.

Multi-award winning inspirational jazz vocalist Robert E. Person has released his fourth indie album LOVE DIVINE. This magnificently orchestrated and divinely written project includes a special remake of the hit “I Really Love You”, written by one of Gospel music’s favorite songwriters Dr. Norman Hutchins. “I Really Love You” is Robert’s second and current radio single that is climbing up the Gospel radio charts.

Songwriter and noted vocalist Mike McCoy also contributed and joins in duet with Robert on the beautifully crafted acoustic ballad “Healed”. Robert adds another duet to the collection with former Richard Smallwood singer Dottie Jones on the Broadway musical hit “Somewhere”. LOVE DIVINE is available on all digital music outlets and will soon be available in stores across the country.

Robert has collected a plethora of indie artist music awards for his work in Gospel and Jazz music. He has now been nominated for a 2015 Washington Area Music Awards “Wammie Award” for Gospel/Inspirational Vocalist of the Year. The 29th Annual Wammie Awards is presented by The Washington Area Music Association who aims to recognize significant career achievements by Washington DC area musicians and artists. The 29th Annual Wammie Awards Show will be held Sunday, March 15th at 8pm at the State Theatre in Falls Church, VA.