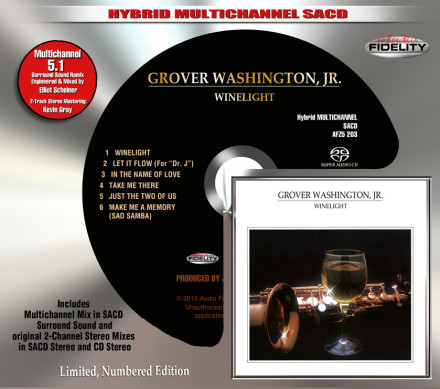 “Among the most beautiful jazz albums ever made.. from one of the contemporary jazz pioneers!”

Camarillo, CA – Jazz aficionados and high end audio enthusiasts alike are excited about the forthcoming release of jazz legend Grover Washington, Jr.‘s “Winelight” album on 5.1 Hybrid SACD from Audio Fidelity in association with ETrain Records. With “Winelight”, Grover Washington, Jr. produced a magical collection of jazz and soul with a touch of pop. He set the standard for the smooth jazz genre – the band is tight, the solos terrific and the arrangements understated and tasteful. The 1980 double-Grammy award winning album was Washington’s most successful album and remains one of the smooth jazz masterpieces.

Top to bottom “Winelight” is superb, masterfully recorded and perhaps best-known for the hit “Just the Two of Us” sung by Bill Withers, but it is the five instrumental tracks that find Grover Washington, Jr. (on soprano, alto, and tenor) really stretching out. He was joined by percussionist (and producer) Ralph MacDonald and also the incomparable Steve Gadd (drums) and Eric Gale (guitar).

Grover Washington, Jr., had long been one of the leaders in what could be called rhythm & jazz, essentially R&B-influenced jazz. The music world lost a great musician when the late Grover Washington Jr. passed away in 1999. Fortunately, he left so many classic albums to cherish and “Winelight” is one of those time-honored works that must be included in any worthy music collection.

Tracks:
Winelight
Let It Flow (For “Dr. J”)
In the Name of Love
Take Me There
Just the Two of Us
Make Me a Memory (Sad Samba)