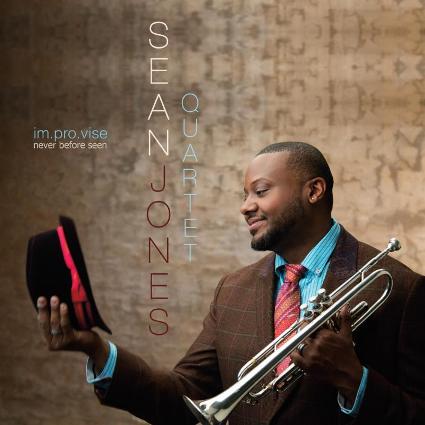 Celebrating his 10th anniversary with Mack Avenue Records, internationally acclaimed composer/trumpeter Sean Jones views his seventh album, im.pro.vise = never before seen, as “a reintroduction of who I am.” Although he has clearly established himself as a formidable leader through recordings and live performances, this album reflects his “conscious decision to approach this latest step in my artistic evolution as a trumpet player, a composer and a leader.”

A major event in that evolution occurred when he chose to step down from his longtime position as Lead Trumpeter of the Jazz At Lincoln Center Orchestra in 2010. But touring with Wayne Shorter and Herbie Hancock’s Tribute To Miles the following year made a truly profound impact on his personal journey.

“I have so much respect for those men, so I asked them how I could best contribute to this music. Without hesitation and in one voice they said: ‘Lead. That’s what we hired you to do.’ That brought it all together for me.”

Through that epiphany, Jones set out with a new motivation firmly in place, and im.pro.vise = never before seen began to take form. Paring his artistic viewpoint down to the basics, he decided to make his first quartet recording with his longtime bandmates, the dynamic pianist Orrin Evans, and the seamless bass/drum tandem of Luques Curtis and Obed Calvaire. Furthermore, he chose to do it old school.

“All of my previous albums were ‘productions’ with overdubs, etc,” says Jones. “This time it was just the four of us in one room, no barriers between us, playing live.” The sense of immediacy and urgency that has always been a key element of the jazz art at its highest level is front and center throughout this entire album. Another essential tradition of looking back to look forward is also omnipresent here, and that includes the full scope of that legacy from its blues roots to its freer explorations.

That perspective is clearly expressed from the very beginning with the opening track “60th & Broadway,” as the influences of iconoclasts like Don Cherry and Lester Bowie are included in the vernacular over which Jones displays his flawless command. “This piece was a nod to all the great years I spent at Lincoln Center,” says the trumpeter. “I’m so grateful, but it was time to move on.” Clearly this movement is both focused and bold, as this piece demonstrates a group synergy locked into a unity of purpose and joy of discovery.

There are five more Jones originals on the album, each of them exquisitely crafted as an ideal launching point for the improvisational exploration. These are not head-solo-head constructs. Instead, the approach on these pieces-and on the entire repertoire-is one of evolution and organic development. Appropriate to that vision, there is a floating sense of time, with a rubato feel often at play alongside distinct rhythmic sections, creating a context that is almost cinematic. These are tales sometimes told gently, sometimes with vehemence; sometimes cryptically and others in matter-of-fact terms. “All of my compositions have a specific meaning,” explains Jones, “something that has happened to me, or affected me in some way.”

“Dark Times” was written over 10 years ago while Jones was pursuing his Masters Degree at Rutgers. “It’s a reflection of a time of struggle and uncertainty…and my decision to put it aside and just move ahead.” As the atmospheric, darkly lustrous rubato opening moves into the fluidly lyrical theme, that depiction is vividly stated. With a freely floating tone reminiscent of Miles’ Filles de Kilimanjaro period, Jones demonstrates his command of the Miles philosophy of time and space where what’s not played is as important as what is.

The opening and closing movements from the five-part “Date Night Suite” are included here. “New Journey” is a joyful romp-open, freewheeling, but anticipatory and speculative. The closing movement, “The Morning After,” begins as a lovely anthem-like ballad “reflecting on the night before,” explains Jones, “then hopeful, speculative,” as an exuberant foray erupts with joyful possibilities.

A ballad of filigreed beauty, “We’ll Meet Under the Stars,” is a serenely evocative piece, with the melodic line caressed lovingly between Evans and Jones, cushioned by marvelously subtle bass and drums interplay.

“There are times when you just have to say ‘I don’t give a damn’ and go with what your feelings are,” expresses Jones, and thus, the “I Don’t Give A Damn Blues,” written on the bandstand in the middle of a wee-hours set. The blues is the core of jazz expression and this piece has that late night intimacy where the musicians are just playing for themselves-and whoever happens to be lucky enough to be there to hear it.

While one can easily envision that blues being played by Roy Eldridge and Teddy Wilson, another staple of the jazz repertoire receives a most unusual treatment. “How High the Moon” – a longstanding vehicle for jam sessions, vocalists, swing bands and bop ensembles-is constructed, deconstructed and reconstructed, offering a surprising new chapter to an often told story in an unexpected time and place. The trumpeter also provides a fiery new interpretation of Jackie McLean’s “Dr. Jekyll” (best known from Miles’ Milestones album). “I wanted to let everybody stretch out in the tradition,” says Jones, and stretch out they do, in breathtaking and virile terms.

Jones includes a piece by another outstanding altoist with “Interior Motive” by Joe Ford. “Joe has always been very inspirational to me, encouraging me since we worked together with the Fort Apache Band and with Charles Fambrough,” reflects the trumpeter. Built upon a richly wooded bass vamp and splendid drumming, the piece weaves in and out of various rhythmic contexts and shifts moods audaciously, but with perfect continuity.

Pianist Evans contributes “Don’t Fall Off the L.E.J.” for the album. “You can’t play with a band unless you take chances while playing together,” says Jones of this spirited excursion, delivered in straightforward fashion, delightfully syncopated and swinging fervently.

This extraordinary album concludes on a most poignant note with Stephen Sondheim’s “Not While I’m Around,” dedicated to Jones’ mother. “My mother has been so crucial in my life. I love Sondheim, and this piece just encapsulates her essence to me.”

Powerfully committed to his art and clearly focused upon where he wants to take it, Jones has developed one of the most impressive and compelling ensembles on today’s scene, all of whom are committed to performing together and taking their place alongside the most affecting and important ensembles in jazz.

Together this quartet generates the consummate energy to which all truly dedicated jazz artists should aspire. The musicians bring everything they have to the table, making the music their own, yet always understanding that the purpose is to fulfill the vision of the leader. “I want to reflect the tradition of what jazz is,” says Jones, “and my voice is a voice that needs to be part of it.”