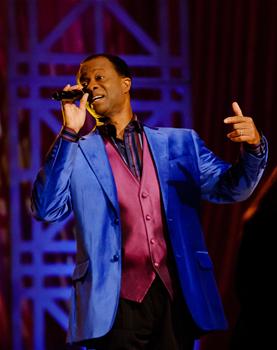 Hall of Fame vocalist and five-time Grammy winner, Larnelle Harris, will receive the 2014 Kentucky Governor’s Artist Award in a public ceremony in the Capitol Rotunda in Frankfort, Kentucky this October. The prestigious award is given to Kentuckians who have made significant contributions to the arts in the Commonwealth, across the country, and around the globe. Harris will be the first contemporary Christian vocalist to receive the Artist Award since its inception 29 years ago.

“It is always an honor to be recognized by your home state,” said Harris, who was born in Danville, Kentucky and resides in Louisville. “I am humbled by this award and sincerely appreciate the Kentucky Arts Council for their recognition.”

The Governor’s Awards in the Arts are presented in nine categories during National Arts and Humanities Month. At the October ceremony, Harris’ hometown of Danville will also be honored with the Government Award for playing an integral role in the success of creating an arts-and-culture-focused atmosphere that benefits its residents and attracts tourists from across the nation.

“It is my great honor to recognize these individuals, both native sons and daughters of Kentucky and others who have chosen to make their homes in Kentucky and enrich our state’s unique culture,” said Governor Steve Beshear.

Harris is the only person in history to be a member of three distinct hall of fame organizations: the Gospel Music Hall of Fame, the Kentucky Music Hall of Fame and the Amateur Radio Hall of Fame. In addition to his five Grammy and eleven Dove Awards, including being named Male Vocalist of the Year three times by the gospel music industry, Harris has garnered nineteen #1 national radio singles and countless top 10 hits. Songs such as “How Excellent Is Thy Name,””I Miss My Time With You,” “I’ve Just Seen Jesus,” plus many others, including his signature song, “Amen,” are now considered modern Christian classics.

From the White House to the 38th Parallel, Harris has impacted audiences across the globe with his music. He was the first gospel artist to perform inside the Kremlin after the fall of the Soviet Union. He is one of a handful of celebrities to receive the Ad Council’s Silver Bell Award for Distinguished Public Service in recognition of his song “Mighty Spirit” as the theme song for the longest-running Public Service Announcement in television history.

Harris continues to tour worldwide, with upcoming tour dates at Carnegie Hall and in Paris, France scheduled for this fall. In addition to his numerous solo dates, Harris also travels with various multi-artist tours including this fall’s Compassion International Savior Tour, the Gaither Homecoming tour, the God of All Glory tour, and the Sandi Patty & Friends tour, the latter of which CCM Magazine recently reviewed and described Harris as having a “larger-than-life stage presence with impeccable vocal prowess.”