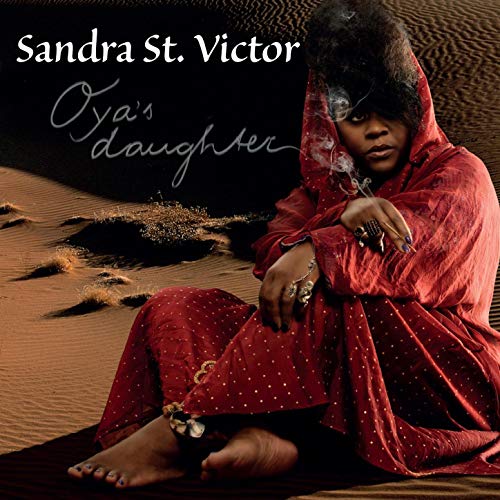 A trained opera singer, the Dallas born, Holland based singer/songwriter Sandra St. Victor is very much an artist’s artist. Through the years she has earned the respect and admiration of her peers and has the accolades to show it. The down to earth and humble force of nature has recorded with Curtis Mayfield and had her own songs recorded by everyone from Prince and Common to Chaka Kahn and Tina Turner. Her music has even appeared on the silver screen, including the movie Shrek. An undeniable performer onstage, St. Victor has logged hours on the road touring alongside such diverse stars as Roy Ayers’ Ubiquity, The Red Hot Chili Peppers and Ziggy Marley. Known and loved as a founding member of the ground-breaking trio The Family Stand, the prolific singer/songwriter has been converting fans note by note over the past two decades with her soulful and potent elixir of R&B, Rock, Gospel and Jazz. Recently Ebony Magazine touted St. Victor as a “singer who rocks,” along side such icons as Grace Jones and others. St. Victor counts Ella Fitzgerald and Sarah Vaughan, Rufus and Chaka Kan,  Sly and the Family Stone, Jimi Hendrix and Elton John, as among her diverse influences. On September 24, 2013, Sandra St. Victor will make her Shanachie debut, Oya’s Daughter.

“Sandra St. Victor is one of those artists who is admired by other artists–she’s that good,” states Shanachie Entertainment General Manager Randall Grass. “She has an ability to move from Soul to Funk to Jazz to multicultural contexts and holds it all together with a spirit that can’t be denied. I think her new album is the best work of her career and will be one of the most impressive releases of 2013.”

Oya’s Daughter is produced by Mark de Clive-Lowe and mixed by producer/mixologist Ty Macklin. “I’ve always sang my life in my songs. These most recent years, in relative silence, I’ve raised two beautiful daughters. This time was for me more creative observation at life and my place in it as an artist,” shares St.Victor. On Oya’s Daughter, these new stories and songs reflect this new sight. The singer and songwriter confesses, “Lyrically, I’m more blunt and still positive. I’m less concerned with opinions, more protective of my own preferences and realities.” “Why Oya?” explains St. Victor, “Oya is the Orisha of change, storms. She is the owner of the winds. Wind is symbolic of the power of thought. My daily movement asks Oya to lift the words of my songs into the breeze, on the air.”

A graduate of Booker T. Washington High School of the Performing and Visual Arts in Dallas, TX, which churned out fellow stars Erykah Badu and Roy Hargrove, St. Victor moved to New York in the early 80s to join Roy Ayers and his touring band, Ubiquity. It was not long before Sandra St. Victor found work singing and touring with everyone from Chaka Khan to Freddie Jackson and Glenn Jones.  Through singer Lisa Fischer, Sandra met Peter Lord and Jeffrey Smith and the kindred musical spirits united to create progressive and critically acclaimed. The Family Stand.  In 1993, Sandra recorded the album Sanctuary for Elektra Records which unfortunately was never released. However, several of the album’s songs were recorded by other artists including the title track which Prince recorded for his CD Emancipation, renaming it “Soul Sanctuary.” Chaka Khan also recorded St. Victor’s “I’ll Never Open My Legs Again,” on her alum Come to My House. Prince recorded it as well, renaming it “I’ll Never Be Another Fool.” Tina Turner also recorded St. Victor’s “Whatever You Want.” In  1996 Mack Diva Saves The World was released on Warner Brothers.  Around this same time Sandra St. Victor had the honor to record the duet, “I Believe In You” with Curtis Mayfield on what was to become the icon’s final recording, New World Order.  In 2001 St. Victor released Gemini: Both Sides independently. In 2010 she released SSV’s Sinner Child, a collection of soulful dance floor anthems produced by Mark de Clive-Lowe.Sandra St. Victor is a visionary and only a visionary could unite, on one stage as a touring unit Nona Hendryx of LaBelle, Joyce Kennedy of Mother’s Finest, multi-Grammy Award- winner Deniece Williams, Caron Wheeler of Soul II Soul, Lalah Hathaway daughter of Donny Hathaway, Indira, Khan, daughter of Chaka, Simone, daughter of Nina Simone, and Leah McCrae, daughter of George & Gwen McCrae. She called this remarkable lineup Daughters of Soul and together they toured the festival circuit with performances at Nice Jazz, Pori Jazz, Java Jazz in Jakarta, and elsewhere.

Oya’s Daughter further solidifies Sandra St. Victor as a one of the most unique, exhilarating and free-spirited musical forces of her generation. Oya’s Daugher is musical proof. “I still very much believe in a universal movement toward oneness, and that music, being the universal language, has to be a integral part of that motion,” states Sandra St. Victor. “I’m doing what I sincerely believe to be my part.”