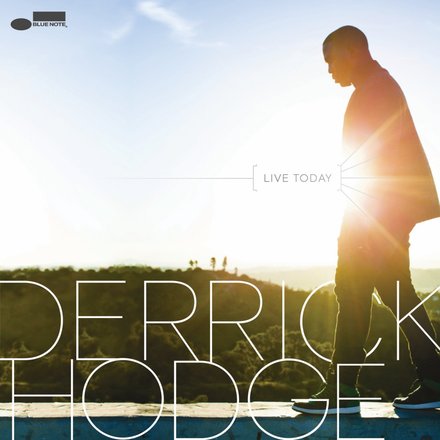 HODGE STEPS OUT FROM THE ROBERT GLASPER EXPERIMENT
WITH DIVERSE DEBUT THAT FEATURES COMMON, GLASPER,
ALAN HAMPTON & OTHERS

On August 6, Blue Note Records will release Live Today, the debut recording from extraordinary bassist and composer Derrick Hodge. Hodge is perhaps best known as the anchor of the genre-bending, GRAMMY award-winning band Robert Glasper Experiment, but he has also spent time in the cutting-edge jazz trumpeter Terence Blanchard’s group, and is currently the music director for the R&B star Maxwell. Hodge brings all his experience as a soloist, bandleader, and composer to the fore on this impressive debut.

“This whole album was about putting on a composer’s hat, but also letting go and making sure that I’m giving people raw examples of how I feel on any given day,” Hodge explains. Live Today weaves together a distinctive musical vision from 14 stylistically diverse originals either written or co-written by Hodge that traverse modern jazz, hip-hop, R&B, gospel, and acoustic folk. The album features guest appearances from rapper Common, singer-guitarist Alan Hampton, as well as RGE members Robert Glasper, vocoderist Casey Benjamin, and drummers Marc Colenburg and Chris Dave, in addition to keyboardists James Poyser and Aaron Parks, saxophonist Marcus Strickland, trumpeter Keyon Harrold, and the American String Quartet, among others.

The title track provides the most explicit articulation of the album’s overall theme, thanks to Common’s conversational rhymes. After playing on three of Common’s albums – Be, Finding Forever, and The Dreamer/The Believer – it was befitting for Hodge to invite the MC on the album. “I really respect Common as an artist and as a person,” Hodge says, “When we first were conceptualizing this album, I knew from the jump that I wanted Common on it.  I’m honored that he agreed to collab with me.”

Now residing in Los Angeles, Hodge grew up right outside of Philadelphia in Willingboro, N.J. He started playing electric bass in the elementary school orchestra. When the high school jazz band needed a bassist, they recruited him. On the suggestion of his high-school band teacher, Hodge continued his formal jazz education at Temple University. While still in college, Hodge played with such Philly greats as tenor saxophonist Bootsie Barnes and trumpeter Terrell Stafford. At the same time, Hodge reaped considerable session work with some of Philly’s finest modern R&B artists such as Jill Scott, Musiq Soulchild, and Floetry. “So much was happening in Philly at the time.  No one really knew that all of these artists were going to blow up so quickly,” Hodge recalls. But that’s certainly what happened.

While on tour with Scott in support of her 2000 debut, Who Is Jill Scott?, Hodge arrived at the crossroads and had to decide whether he was going to continue playing with her or finish school. After a heartfelt conversation with Scott, he returned to Temple and continued developing his jazz chops.

Live Today culminates all of Hodge’s experiences working with various jazz, R&B, hip-hop, gospel, and classical artists, resulting in music that’s at once adventurous yet accessible, and more important extremely personal. “I wanted to be honest and transparent to all of the people who were supporting me and wishing me well,” Hodge says, “I wanted this album to give them real snapshots of how I felt as an artist at a given moment on a given day.  Let them be a part of my journey.”

The track listing for Live Today is as follows: