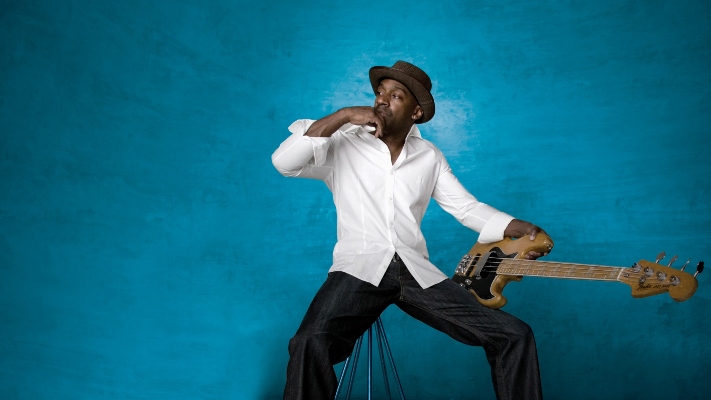 NEWPORT, RI, February 20, 2013 – Marcus Miller, the stellar composer, producer
and multi-instrumentalist best known as a bassist, has been added to the Saturday, August 3, line-up of the Newport Jazz Festival® presented by Natixis Global Asset Management, which takes place August 2 – 4 at the International Tennis Hall of Fame and Fort Adams State Park. Miller, who by the age of 15 was already playing bass and writing songs for flutist Bobbi Humphrey and keyboardist Lonnie Liston Smith, is the personification of the Newport Festivals Foundation’s mission of presenting the best of emerging and established artists.

As a producer, writer and player, Miller was the last primary collaborator of Miles Davis, contributing the composition and album “Tutu” to the catalog of contemporary jazz music. His collaborative talents have been showcased in his work with Luther Vandross, contributing to more than half of the singer’s albums as a producer, composer and/or player on a string of hits including “Power of Love/Love Power” for which Marcus won his first Grammy, 1991′s R&B Song of the Year. He also left an unforgettable mark on David Sanborn’s distinctive sound.

In 2008, Marcus co-led the all-star bass trio S.M.V. with Stanley Clarke and Victor Wooten for an album (entitled “Thunder”) followed by an extensive world tour. The following year, he put together a new band of young musicians for “Tutu Revisited” – a project that started as a special one night only event that culminated with the CD/DVD “Tutu Revisited” featuring Christian Scott. In 2011, he co-led the trio DMS, a funk-jazz collaboration with George Duke and David Sanborn. Last summer, Marcus conceived of and produced “Tribute to Miles,” a 9-city tour of Europe with fellow Davis alumni Herbie Hancock and Wayne Shorter, in which they presented their unique vision of every era of Miles’ music. (Shorter celebrates his 80th birthday with Hancock as special guest at the Newport Jazz Festival also on Saturday, August 3.)

The bassist, who started his career as a young sideman, now finds himself as an elder to many of today’s younger artists. He tells ebony.com, “Well, I was always the youngest guy in the group, by far. All of a sudden, one day, man, I looked up, and I’ve got these guys who are like, in the same position that I was. I’ll tell a story about somebody like Miles Davis or Dizzy Gillespie, who they only read about … and they’re all looking at me with really big eyes. And I realize, oh wow: I’m that guy, now. I’m the connection for these guys to the history of this music.”

Tickets for the 2013 Newport Jazz Festival presented by Natixis Global Asset Management are on sale now at www.newportjazzfest.net, by phone and by mail.

There will be a festival office in the Newport area where tickets can be purchased in person at a later date. For general information, craft vendor information or to leave a message for festival staff, call the festival hotline at (401) 848-5055. For more information, log on to www.newportjazzfest.net or www.newportfestivalsfoundation.org.